Showing posts from June 20, 2004
Show all
June 25, 2004
TERRORISTS! . You amateur rocketry enthusiasts are all terrorists! At least that's what the ATF want you to think. I read a sad report on Wired today about the accelerating demise of amateur rocketry. Thanks to Homeland "Security" and all manner of other knee-jerk policies by El Busho's brigade, rocket engines are now basically contraband. They're classified as explosives, and only terrorists could need explosives, so because the State knows best, amateur rocketeers are being forced to endure 6 month background checks, fingerprinting, visits from G-men and criminal profiling simply because of their hobby. Yet another of the billions of reasons El Busho needs to go. The more "secure" he tried to make this country, the less secure it becomes and the more rights get stripped away.
Post a Comment
Read more
June 25, 2004
I feel it's my duty as a CD-buying citizen to let people know about things that will make their lives easier. For example : how to circumvent copy-protected audio CDs, so you can use them commensurate with the contract of purchase. ie. you bought the right to play the music. You did not buy into a contract to only play the music on certain devices. Take your copy-protected disc, and blacken the very outer edge of the play side with a $1.00 felt tip marker. Other internet postings and blogs claim that tape or even a sticky note can also be used to cover the security track. (typically located on the outer rim of the disc). There are suggestions that copy protection schemes used by other music labels can also be circumvented in a similar way. Sony's proprietary technology, deployed on many recent releases, works by adding a track to the copy-protected disc that contains bogus data. Your computer is programmed to read data files first, it will continuously try to play the bo
Post a Comment
Read more
June 25, 2004
EMI have gone out on a limb and decided to alienate anyone who buys their CDs. Starting with the new Beastie Boys CD, they're putting a self-installing virus on the music CD. It's a small executable that alters the way Winblows and Mac OSX can read the disc. Effectively, it's digital rights management (DRM) via the back door. It's also probably illegal, and likely bloody annoying. And curiously, it's not on the UK and US versions of the disc, so anyone outside those regions can simply mail-order it online. This link will spew out tons of hits for EMI and their subversive DRM ideas. Nice one - so EMI are now part of the problem. Because people don't want and don't like malware, adware, spyware or virusses. So they're obviously going to steer clear of EMI's CDs, instead getting them from downloads.
Post a Comment
Read more
June 25, 2004
Wow. I whiled away my lunch break today doing some online IQ tests. The lowest score I got was 120 on the "Super IQ Test" and the highest was 133 on the "Classic IQ Test". All the other ones put me in the mid-ground so I guess that means my IQ is 126. If I believe the web, that puts me in the top 2.2% of bright sparks, makes me highly organised and a genius mathematician. That's all well and good, but it didn't help my understanding of predicate calculus - the reason I bombed out of university so spectacularly.
Post a Comment
Read more
June 24, 2004
Playing the numbers game again, El Busho is in an increasing downward spiral. Lets hope it continues. This week's CNN / Gallup poll: 54% said it was a mistake to send U.S. troops to Iraq, compared with 41% who expressed that sentiment in early June. 55% percent, also said they don't believe the war has made the United States safer from terrorism -- rejecting an argument that President Bush has repeatedly advanced in his rationale for the war. Kerry's favorable rating is higher than Bush's, 58% to 53%, and it has grown over the past few months as Bush's has fallen. Kerry also gets higher ratings on who would better handle the economy -- 53% percent to Bush's 40%
Post a Comment
Read more
June 23, 2004
Boo hoo . My heart bleeds. Seems all the Wi-Fi startups have finally figured out what consumers have been saying from the start - we 'aint going to pay $9 an hour for public WiFi access. WiFi companies are going bankrupt quicker than you can say dot-com boom.
Post a Comment
Read more
June 23, 2004
Ho hum.
Post a Comment
Read more
June 22, 2004
The full fury of Farenheit 9/11 is coming to bear. In just 3 days, the movie finally gets its release. The Web is alive with discussion of the film even though only reviewers have seen it. The overriding thing to realise is that all the reviews, left-wing, right-wing and "unbiased" all say the same thing : this is going to be a great movie and could (should?) cost slacker frat-boy El Busho his seat in the White House.
Post a Comment
Read more
June 22, 2004
Third hostage executed :-( The South Korean, Kim Sun-il has been executed. We presume it's by beheading but reports are still unclear.
Post a Comment
Read more
June 22, 2004 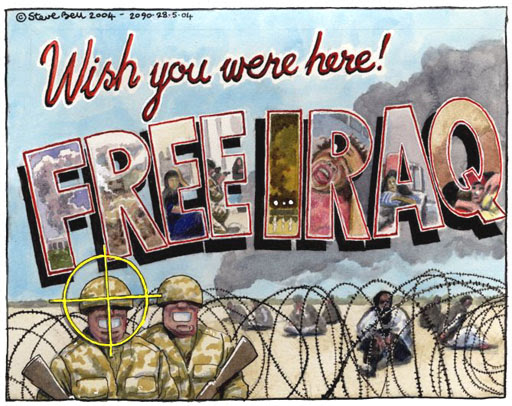 Today's funny cartoon :
Post a Comment
Read more
June 21, 2004
Mike Melvill will become a name to remember: the first civilian astronaut. It's confirmed he reached 100.1241 km altitude this morning. He's just been presented with his astronaut wings. The nay-sayers have already laid-in with their arguments about "going into space is a lot different to going into orbit." They're failing to see the relevance here : it took Rutan's team $20Million to do this. Think about that for a moment. That's a pitiful amount of money to go from drawing board to space and back. The bigger question now is : when will they go for the Ansari X Prize? It seems they broke something at full thrust on Spaceship One - no word on what or how long it will take to fix. And if they do succeed, what next? Orbital travel? Ballistic travel? New York to Tokyo in under an hour?
Post a Comment
Read more
June 21, 2004
Wow! Freaky. I think we just had an earth tremor. I thought someone was trying to attract my attention my moving my chair. Pushed my headphones off and turned around and there was nobody there. All the plastic aircraft models on my desk had fallen over though. So I went and asked a couple of the others here in the office, and they all felt it too. Weird.
Post a Comment
Read more
June 21, 2004
Seems Google have pissed off the competition. Yahoo! are filing all incoming emails to their accounts from Gmail accounts as "spam" or "junk". MSN and Hotmail meanwhile, are just arbitrarily deleting them. ie. if I send an email invite from my Gmail account to someone on Hotmail, they'll never get it, but it won't bounce so I'll think it's been delivered. Doesn't sound like "open", "free" or "competition" to me.
Post a Comment
Read more
June 21, 2004
He's on the way back down. Initial reports said he might not have made 100km because the engine shut down early. Turns out he had enough speed and spent 3 minutes weightless. Welcome to the age of private space travel. For 1/20th of the cost of a single Shuttle launch, Scaled Composites have devised, researched, built, test flown and successfully reached space in a private spacecraft.
Post a Comment
Read more
June 21, 2004
Spaceship One was dropped from White Knight 4 minutes ago - he's on the way !
Post a Comment
Read more
June 20, 2004
Longest day of the year today. In worse news, a South Korean hostage has surfaced on video with his captors giving the west 24 hours before the beheading.
Post a Comment
Read more
More posts