Showing posts from November 6, 2005
Show all

Sometimes when I'm surfing Amazon's "recommended items" pages, I just have to say "what the.....?" Whilst I appreciate crotchless panties, especially when modelled correctly as per their thumbnail image, how on earth did Amazon make the connection between the PSP puzzle game "Lumines" and crotchless panties? Do they somehow believe that because I play videogames, I also have a penchant for collecting ladies underwear?
2 comments
Read more 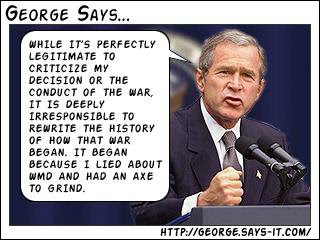 The number of people killed in the WTC attacks was 2749. The tally of American lives lost in Iraq because of B*sh's lies currently stands at 2059. In 690 dead American's time, who is going to ask the question Is the Iraq war worth killing more Americans than the original WTC attack?
Post a Comment
Read more

November 10, 2005
I stumbled upon a website today whilst looking for info on GPS receivers, which seems like it might be quite a laugh. Geocaching.com is a worldwide GPS-based scavenger hunt of sorts. The idea is simple. You create a cache with something in it and include a log book, then hide it somewhere and post the GPS coordinates on this site. Other people can then try to find it. When they do, they sign the logbook, take something out and/or add something to the cache, then put it back for others to find. There are "hitchikers" which are items which travel from one place to another. For example you can place something in your cache and put a note on it telling the next finder to move it somewhere else. When they find your cache, they take it and place it in the next one that they find, and so on and so forth. Some items have been around the world already. I think I might try to find one of the local ones this weekend for a laugh.
Post a Comment
Read more

Enrique Iglesias has a tiny dick ? 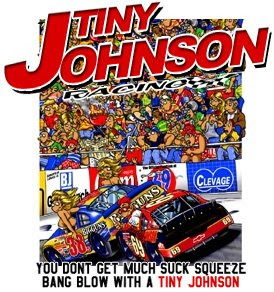 This just makes me laugh and cry at the same time. I'm not sure I believe it totally but more than one source is reporting that Enrique Iglesias really said this : "The next product I'm going to put my name on is extra-small condoms. I can never find extra-small condoms and I know it's really embarrassing for people." Let's review. Enrique is porking Anna Kournikova - one of the hottest women in sports. He's the hearthrob of thousands if not millions of women all over the world. And he's just declared that he has an extra-small willy? From a marketing standpoint that's bad, because buying extra small condoms with a guys face on the wrapper doesn't make it any less embarrassing. It actually makes things much much worse. From a context point of view, you'd hope this quote was radically out of context. No bloke - especially a Latin bloke - would ever volunteer information about his novelty sized johnson unless he's got a grapefruit siz
Post a Comment
Read more

November 10, 2005
Ah yes - I forgot to follow up on the helicopter check ride. Well it was a bit of a wash because of my fine athletic physique. They have two types of helicopter there - Robinson R22 and R44s. The R22 has a seat crush weight of 108kg, and being the fine 118kg specimen of a man that I am, that wasn't going to work. The R44 has a much higher crush weight but they only have one of those and it was out with an instructor at the time. The school has had a lot of interest recently and they're looking to get a Schwiezer for their collection, which also has a high crush weight. When they get that in, or when they have a slot on the R44, they're going to call me to carry on. I did spend a lot of time talking to them about the various requirements, licenses, job prospects etc, and the bottom line seems to be that if I decide to go through with it, I'll be very happy but very poor. In the meantime I need to shed 10kg.....
1 comment
Read more

November 09, 2005
Here's an amazing-but-true fact for you. "President" B*sh has borrowed more money from foreign governments and banks than the previous 42 presidents combined. Don't believe me ? It's the treasury department's own numbers. According to them, from 1776-2000 (the first 224 years of U.S. history), 42 U.S. presidents borrowed a combined total of $1.01 trillion from foreign governments and financial institutions. In the past four years alone, B*sh has borrowed $1.05 trillion. Impressive. Even more so when you consider that the previous 224 years include two World Wars, the Vietnam Defeat and the original Gulf War, as well as military actions in Bosnia. It also included the Great Depression and 1987's Black Monday. Where, oh where, pray tell, has that money gone ?
Post a Comment
Read more

The Republic of America

November 09, 2005
A friend of mine pointed out something I'd never really understood yesterday. The difference between a democracy and a republic. In a democracy, everyone basically gets their vote for all aspects of government and everyone's voice is heard. In a republic, everyone gets their vote for all local aspects of government, but in doing so they elect a representative to go the federal government and then trust that this person will vote favourably. In other words, whilst it may seem like you have a say in what goes on, it's only at the most local level. Once you've got to the point of electing an official to represent you, it's no longer a democracy. With that in mind, with proportional representation in America and MPs in England, neither country is a democracy. They're republics. So the next time someone spouts off about our "heros" fighting for freedom and democracy, you have two reasons to disagree. Firstly, obviously, they're not fighting for your fr
Post a Comment
Read more

November 08, 2005
Copycat rioters have torched vehicles in Germany and Belgium tonight, probably trying to leverage the news coverage of events in France. If the government there don't do something dramatic, and quick, their rioting could spill over into other countries proper. I don't see much coverage of it in the US press yet - after all it's only been two weeks and it doesn't directly involve the US. But they should be watching it very carefully. If people are hijacking muslim faith as an excuse to riot in France, how long will it be before some lunatics do the same here? Wars have started for less than this. And the crazy thing is they're rioting for nothing. Two African kids were caught stealing car parts, they ran from the police and tried to hide in an electricity substation where they electrocuted themselves. Now why are people rioting because of that? The answer is that it's not because of that but it's using that event as a catalyst to release pent-up anger and f
Post a Comment
Read more

November 08, 2005
Can't touch this :-) We're burning the candle at both ends at the moment putting the finishing touches on a bunch of kickass demos which are needed at the end of this week. As usual the crunch has turned up a bunch of bugs in the software, but what we've got so far looks awesome. I'd like to see the competition come up with anything even half as good with their stupid little PC-based solutions.
Post a Comment
Read more

Liar , liar, liar. We know B*sh can't speak a single word without lying, so why does he persist? Photo evidence would seem to suggest that indeed America does pursue torture. But today B*sh told us all that "we do not torture". Well I'm glad he cleared that up for us.
Post a Comment
Read more
More posts