Blammo. And I witness yet another accident.

December 03, 2005
Apparently one of my jobs in life is to be witness to car accidents. I've seen 4 since we moved to Utah and given statements to the police on all of them. Add one more today. We were on our way back from getting lunch and going north at the intersection of 2700S and 1300E the woman in the red minivan in front of us sailed through a red light and straight into the side of a white sedan, right in front of us. No brake lights, no slowing down. Just full tilt through the lights. I parked up and put my hazard lights on and went to see if the old guy in the car was okay. Fortunately he had side airbags so that saved him from mashing his head against the B pillar. The police, fire and ambulance turned up and I had to give a statement. The woman was so ditzy it was unnerving. She actually said to me "I noticed the lights were red as I drove through them and thought 'why are the lights red?'" ?!?!?!?!?!!!!!!?!?!?!!!!!!! What the FUCK woman? You noticed the lights were r
Post a Comment
Read more

Finally the TSA have employed a braincell.

December 02, 2005
From December 22 nd , the TSA is going to stop treating people like criminals if they're carring scissors, small blades or wrenches. Those are three of the things which are being taken off the "banned" list. This is A Good Thing because it means they'll be able to spend more time looking for stuff which might be dangerous, and less time arresting people for no reason. Of course the news agencies got hold of some knee-jerk scared white woman for a quote. The BBC's was one of the best: "When weapons are allowed back on board an aircraft, the pilots will be able to land the plane safely but the aisles will be running with blood," said Corey Caldwell, a spokeswoman for the Association of Flight Attendants. Apparently Corey Caldwell isn't too bothered about the axe, the emergency tool, the three oxygen cylinders, the defibrilator, the toilet door handles, the seatback table legs, the aluminium strips in the overhead bins or any of the other multitude of
Post a Comment
Read more 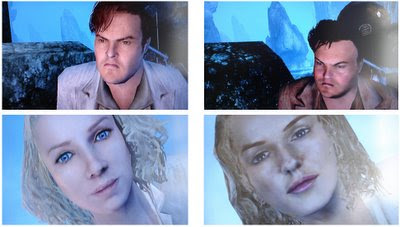 Several game sites have now concluded the following: (1) if you don't have HDTV, the Xbox 360 is a waste of money (2) in some cases, the PS2 does a better job of graphics for the same game. Case in point, King Kong. On the left, the PS2 screenshots, where Jack Black looks like Jack Black, and the girl looks quite attractive. On the right, the Xbox 360 screenshots where Jack Black looks like a pitt bull licking piss off a stinging nettle, and the woman looks like she's done 10 rounds with Mike Tyson (in the ring boxing our out of the ring being slapped around, your choice). This raises another interesting question : why are the game houses remodelling 3D items for the Xbox 360? The same models are used on the Xbox, PS2 and Gamecube. Why change for the 360? Is there something in the hardware that makes life difficult for the programmers? Roll on the PS3. (photos shamelessly copied from Wired.com article, but straightened up in Photoshop)
Post a Comment
Read more

B*sh in it for the long-haul or the popularity? 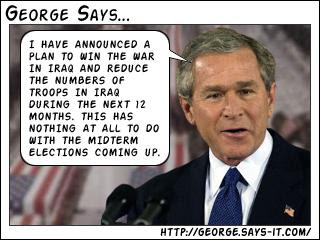 B*sh was on TV this morning yakking about something, but one phrase stuck out. He said "We will not settle for anything less than absolute victory in Iraq." Guess he's in it for the long haul then. Because he's never going to win that mess. More likely, of course, he's going to bail out slowly to try to boost the popularity of him and the Republicans in time for next year's mid-term elections.
Post a Comment
Read more

November 30, 2005
Keeping up with your trance anthems? Reading my blog regularly? Tell me my blogger reader, where do these lyrics come from then? Drop me a line in the comments. ♫ Won't you stay tonight? Let the truth shine bright Where can love be found? If your heart won't feel Memories Emotions that we share Teardrops Signing my face How could it end this way? Don't leave me, love me Just a little bit longer.................. Or if you want another track, try: ♫ Ooooh she's so special Ooooh so fucking special On and on and on she cries to men On and on she makes me feel so special She's a devil in disguise She's a golddigger
Post a Comment
Read more

November 30, 2005
Life imitates art. Remember how unfeasible the surgical operation was in Face/Off? Not any more.... BBC story.
Post a Comment
Read more

November 29, 2005
You know things are going badly when one of the Four Horsemen starts quibbling about the definition of a word. Rumsfeld today decided that the insurgents in Iraq should no longer be referred to as 'insurgents' because he says it gives them too much legitimacy. (I'm sure they care about legitimacy). Suggested alternatives are "the terrorists", "the enemies of the government", "anti-Iraqi forces", "Enemies of the legitimate Iraqi government", "foreign terrorists", "Saddam loyalists", "Sunni Arab rejectionists", "criminals" and plain old "people that do it for money." That last one is my favourite. Because obviously people who blow themselves up are doing it for the money. I mean what else are they going to use to buy their Gucci when they're a smouldering collection of hundreds of pieces of burning flesh? Donald mate - it doesn't matter what you call them. Changing the words us
Post a Comment
Read more

Kicking Microsoft whilst they're down.

November 28, 2005
Because I love to kick Microsoft whenever I can, I thought this was a nice little story today. A new study by Nielsen Entertainment shows that the PS3 has more going for it than anyone expected, most of all Microsoft. Desperate to get a chunk of the gaming market, Microsoft rushed their Xbox 360 to market complete with flaws and crashes. Sadly for them, the Neilsen study has shown that over 50% of gamers aren't buying the Xbox 360, instead choosing to wait for the PS3 before making a decision. This feat is enormous for Sony, considering there hasn’t been any official announcements or advertising. Consequently it's terrible news for Microsoft who believed that being first would win them the business. It's going to be a classic case of second mouse to the trap getting the cheese. Sony can bide their time safe in the knowledge that when the PS3 is released, it's going to whip Microsoft's ass.
Post a Comment
Read more

Yes, winter is upon us. 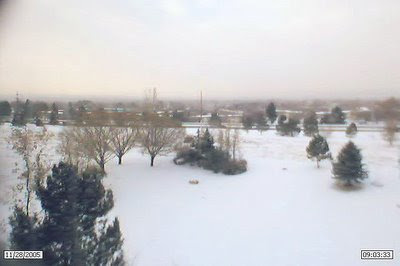 Three days of snowing later, and winter is definitely upon us. The mountains look nice and white, as do the rooftops. And you can tell it's winter because of the number of SUVs on their roofs and sides, flipped over on the side of the road. It was like mor(m)ons on ice this morning. It seems that just as with the first snowfall every year, Utahns have forgotten how to drive in the stuff. I suppose it's only natural though. There's only snow on the ground for 5 months of the year - it's not like they should be able to remember :-)
Post a Comment
Read more
More posts