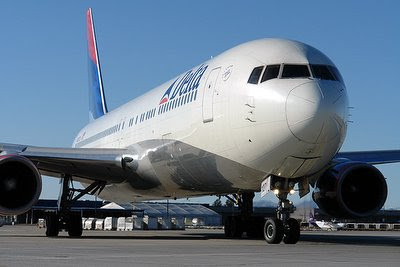 If you're into planes (and I am) and you've got friends in the right place (which I do), you can get access to airports the likes of which the average planespotter can only dream of. After doing some data collection on friday for work, the guy escorting me airside at KSLC took me out to the hold point at runway 34R, from where I was pretty much on top of the aircraft. Most of these photos were taken moments before being power sanded with a mixture of dirt, sand and gravel in the jetwash of the aircraft. A posing 767.... Literally under the wing as it taxis on to the runway... And even a thumbs-up from some cool Southwest pilots...
Post a Comment
Read more

February 24, 2006
After all, 23 years ago he saved your life. Or if you're younger than 23, he allowed you to be conceived. It's a sad world where someone like this now lives so far below the poverty line that he's nearly dying of starvation. Stanislav Petrov
Post a Comment
Read more

February 24, 2006
Winamp is on random play, skipping sweetly through 5.01Gb of 80's music. This one popped up and I thought the lyrics were very relevant, for some reason. So name this tune: The place where I come from is a small town They think so small They use small words -but not me I’m smarter than that I worked it out
3 comments
Read more

No, and stop asking me!

February 23, 2006
Since AOL bought out Winamp, it seems like every time I run it, it tells me about a new upgrade which is available to fix some critical security flaw. Why is it that when Winamp was independent, releases came out three times a year, and now its owned by AOL, they're coming out three times a week? No, I don't want the latest version, and for the love of God stop bloody asking me!
Post a Comment
Read more

February 22, 2006
Lest we forget what total idiots the B*sh regime are: - B*sh and Rumsfeld both admitted today they didn't know anything about the UAE port deal until after they approved it. - Turns out Cheney was drunk when he shot his "friend" in the face. Very drunk. Like unable to pronounce basic words and stand up properly drunk. So said his Secret Service flunkies today.
Post a Comment
Read more

February 22, 2006
FUCK! Since upgrading to iTunes 6, JHymn will no longer strip the DRM from my music purchases. Those bastards at Apple have screwed everyone over again. Once more I'm now stuck with music on one machine - I can't burn it to an mp3 CD for the car, I don't own an iPod and I can't take it home. What the fuck use is downloadable music if I can't do with it what I want? This whole RIAA and fair use thing has got to stop. It's destroying the music industry. Oh well - back to downloading illegally then. Sorry RIAA - you can blame Apple for this one. It's not my fault you nazi's won't let me listen to music anywhere I want after I've purchased it. So I'll just stop purchasing it again. Thanks to JHymn, you nearly had me sold on the idea, but now you've locked it up tight again, you can all go fuck yourselves.
2 comments
Read more

February 21, 2006
There's a couple of political wranglings going on right now and I reckon the pair are linked. B*sh is pushing for line-item veto power - basically the ability to allow him to nix any single proposal at a micromanagement level. At the same time, Michael Jerkoff, the homeland security guy who looks like a child-molester, things it would be just swell to let the UAE run 6 US ports. Hmm. Well clearly letting the wolf guard the sheep is not a good idea. So here's one way it could go down : El Presidente is going to say something to the effect of "well I could veto this deal if you give me line-item power of veto", thus getting what he wants. So option 1 : the UAE port deal is a smokescreen to cover up something unpalatable that B*sh wants. Option 2 : There's a massive backhander deal in it for the B*sh family and/or Halliburton. Option 3, for the conspiracy theorists, is that B*sh and his cronies have realised the inescapable truth : you cannot secure ports. Given th
Post a Comment
Read more

February 20, 2006
This is classic American stupidity. A Utah soldier, Sgt. Layne Morris, of West Jordan, has won a lawsuit he filed against an Afghan "terrorist" because - get this - the "terrorist" threw a grenade at him and the shrapnel blinded him in one eye. He's won $102million in damages. At its most basic level, he has sued an enemy combatant in a war, for shooting at him. This is so retarded I wondered whether to blog about it or not, but the sheer stupidity of it made it worthy of inclusion. To put that into perspective, that's nearly 4% of the entire annual gross national product of Afghanistan. Does Sgt. Morris think these guys who fight with 30 year old Russian weapons, have billions of dollars stashed back at the cave under a rock or something? He's obviously never going to see a single cent of this, which makes it the golden pinnacle of frivolous lawsuits. I'm sorry Sgt. Morris got blinded in one eye but there is (currently) no draft, which means he vol
Post a Comment
Read more

February 19, 2006
That's the number of vertical feet I skied today. This I know because of the fabulous Axess ski pass system that Solitude has. The new boots are great. They're no carpet slippers but then no ski boots ever are. At least I was able to ski right through to about 14:00 today before calling it a day :-)
Post a Comment
Read more
More posts