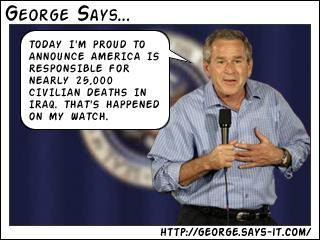 July 15, 2005
I know I've been riding motorbikes since 1988, and I've pretty much seen every display of bad driving from cagers, but once again this morning, I was given a graphic demonstration of how car drivers are blind, and never ever accept responsibility for their actions. Coming up I-80 on the outside with a line of traffic on the inside lane. As we get into the corner towards Parleys canyon where I-215 splits off, a gold-ish yellow Mazda indicates once and pulls out into the outside lane right in front of me. I had two choices - split lanes and overtake between him and the Fedex van, or run into the back of him. I split lanes and got around him, and flicked him the universal sign for "you're number one" with my left hand as I got past. At which point he leans on the horn and flashes his lights at me. Because obviously I'm to blame for him not using his eyes / mirror / brain. Fucking cagers.
Post a Comment
Read more

July 14, 2005
Something is definitely going on. Facilities guys walking around with empty boxes, glass executive offices going up in the other building, and stonewalling from everyone who might be able to answer prickly questions.... I think we're counting the days now.
Post a Comment
Read more

Place your head between your knees. 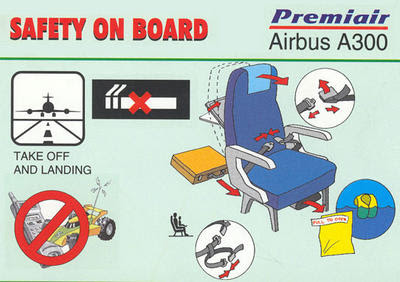 This image was sent to me by someone in email - its taken from the safety card on Premiair Airlines. I interpret it as follows: For take-off and landing, I should buckle up, and place the seat in an upright position. So far so good. Now I'm buckled in I need to place my hand baggage under my own seat from behind. Whilst doing this, I should also fold up the table belonging to the person behind me. And I think the illustration in the circle is telling me I have to unbuckle in order to do this. After sitting down again, I've either got to drive over a cellphone, or stop the passenger next to me from using their cellphone whilst driving. One or the other. Once I've done all that, in final preparation for take-off, I should take the life vest out from under the seat and throw it out of the window, and watch it float off in the water on its own. Or is it just me ?
Post a Comment
Read more

July 13, 2005
T minus 1:23 - there's a problem with the low level fuel cutoff sensors on Discovery. These measure any low fuel conditions which could cause catastrophic engine failure if the engines dry up on full throttle. The launch director just scrubbed the launch saying "this isn't something that's going to resolve itself today." The problem means they're going to have to empty the external tank. T minus 1:21. Launch director gave a "go for unstrap". The crew are being taken out of Discovery and the launch is officially scrubbed. :-(
Post a Comment
Read more

Pucker up. STS 114 Return to flight at noon. 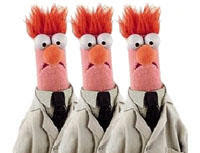 Oh dear. I saw a commercial last night for the new Subaru SUV - the B9 Tribeca. Where to start? It's wrong on so many levels. Obviously the first place to start is the name. Daft doesn't come close to describing "Tribeca". And they pronounce it "Try-beeker", which to me conjures up pictures of three beakers of coffee, or three Beakers from the Muppets. The look on his face is the same look I had when seeing this thing on TV last night. Speaking of muppets, it looks like this must have come from some muppet in the American Subaru design bureau - the same people responsible for the butt-ugly front end of the 2001 Impreza (thank God that's gone!) The Tribeca looks like the bastard offspring of the Infiniti FX, Pontiac Aztek and a Porsche Cayenne, and this is definitely not a good thing; all those vehicles are butt-ugly themselves. The result is a truly heinous Subaru, one where the word "design" can definitely not be applied. Gone are the nice d
Post a Comment
Read more

Suicide bombers in England could have been arrested before.

July 13, 2005
It wouldn't surprise me to wake up in the morning and find England on fire. The police have stated that the London bombers were Muslims of Pakistani origin, had been born and brought up in Britain. It seems now that all 4 were suicide bombers. The worst news is a developing story ( Reuters ) that three of them have been arrested by the police in the past. The bombers' background has become the subject of a high-profile spat between London and Paris, with Home Secretary Charles Clarke denying comments by his French counterpart that British police had arrested some of the suspects in the past. "It is completely and utterly untrue. I am absolutely staggered he should make that assertion," Clarke told Sky TV. Comments like that are Bad. They indicate denial. Worse still, a British police source said it was possible some of the men might have come to the attention of police in the course of normal criminal investigations. The English of today aren't known for their r
Post a Comment
Read more

...and the BBC bows to American pressure....

July 12, 2005
It had to happen. The BBC have bowed to pressure from other news organisations, notably American / Whitehouse ones, and have given up using the correct terminology for militant attacks. Now, like all the news agencies in America, the BBC are bandying about the "T" word. No longer were the bombs in London a militant attack on civilians. They're now terrorist attacks. Rather than try to explain what happened using correct terminology, now they refer to everything in CNN terminology. Apparently, media watchdogs have for years taken issue with the BBC, along with other news organizations such as Reuters, for a reluctance to call deadly attacks against civilians terrorism. I guess that means Reuters will also get nobbled by the Americans and start using the "T" word too.
Post a Comment
Read more

July 11, 2005
England is the most surveilled country in the world with one CCTV camera for around every 500 citizens. In any given day you'll be photographed and vidoed over 200 times. Yet Blah went on TV this weekend and said, and I quote : "No amount of CCTV surveillance will ever be able to stop bombings and acts of terrorism like this." Well that leads to an interesting question then : why so many CCTV systems if the Prime Minister himself has admitted they're useless ?
Post a Comment
Read more

A State Of Trance 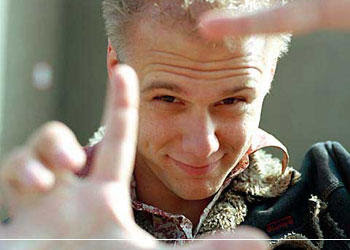 I repeat my assertion from last week : Menno de Jong - Tundra -Fierce dub mix. Look it up, download it, you'll know what I mean. A State Of Trance Episode 204, 57 minutes in. Click on Armin Van Buuren to go to his website. Best DJ in the world right now AFAIAC.
Post a Comment
Read more

The real reason cinema numbers are down.

July 11, 2005
Hollywood , the MPAA and movie industry as a whole are looking at a downturn in cinemagoer numbers, and to them, it's a mystery. (To the MPAA of course its because we're all criminals pirating movies left right and centre.) The real reason is far simpler, naturally. As part of the moral decay of society - the lack of social grace, the loss of common decency and courtesy, and the ever present cellphone infection, the reason people are not going to the cinema so much is because of all the irritations. The crying babies, the cellphones and pagers, and most irritating of all, the fucktards who talk all through the movie. Not just here and there, but a running commentary from the first frame to the end of the credits. When we went to watch War Of the Worlds, we were hemmed in on both sides by two couples in their 40s and 50s who should have known better. But no, the wives of these respective couples yakked and chatted to their hubbies all through the movie. In the end, I had to tur
Post a Comment
Read more 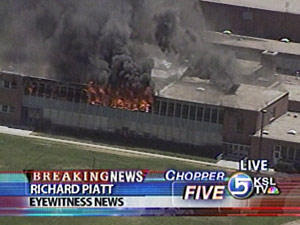 We've been watching a raging smoke cloud for an hour or so from the office windows here, and one of my cubicle mates just got a call from his wife. Seems that a server caught fire in their computer room and they didn't have any extinguisher systems. The whole school is burning to the ground now and you can see the smoke column from all over the valley!
Post a Comment
Read more 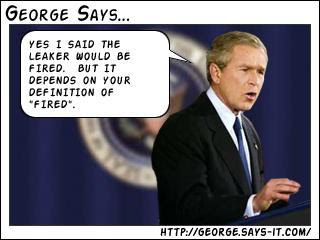 Newsweek have outed Karl Rove as the man behind the leak of CIA confidential information. Now to you or I that would seem like a treasonable offence - at the very least he should be removed from government. But I suspect because he's deep inside B*sh's ass, Rove will be safe, and another blow will be dealt to the checks and balances that America used to have to protect its citizens from the government. For two years, the White House has insisted that Rove had nothing to do with the leak, B*sh has said on numerous occasions that the leaker would be fired. It will be interesting to see if he follows through, or if, as I suspect, he'll prove once again that he is a liar and find some way to befuddle the issue so that Rove can stay on.
1 comment
Read more

America and the UK planning to pull out of Iraq.

July 10, 2005
The Mail On Sunday has run a story back in England indicating that America and the UK are secretly preparing to withdraw most of their troops from Iraq. A secret paper called "Options For Future UK Force Posture In Iraq" written by UK Defence Secretary John Reid for Tony Blair reveals that many of the 8,500 British troops in Iraq are set to be brought home within three months, with most of the rest returning six months later. The leaked document, marked Secret: UK Eyes Only, flies in the face of Blah and B*sh's pledges that Allied forces will not quit until Iraq's own forces are strong enough to take control of security. If British troops pull out, other members of the Alliance are likely to follow. The memo says other international forces in Southern Iraq currently under British control will have to be handled carefully if Britain withdraws. It says they will not feel safe and may also leave. Embarrassingly, the document says the Americans are split over the plan -
Post a Comment
Read more
More posts