July 05, 2006
Ken Lay, dead? How convenient given he was about to face decades in jail. Of course he couldn't possibly be doing a Robert Maxwell now could he? Nah. After all, who would think a fake death of someone in his position would be preferable to decades in prison. The only difference is Ken Lay didn't "fall off his yacht". Yeah, right. Sure he's dead. Whatever.
Post a Comment
Read more 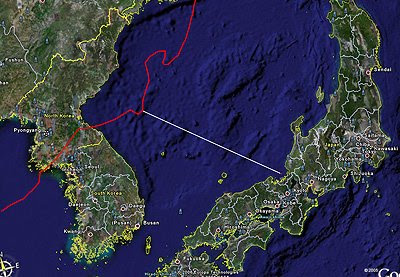 Media bias is an interesting thing. The DPRK's missile test yesterday was reported to have failed a mere 600km off the Japanese coast, in the Sea of Japan. Sounds scary until you look at a map. Let's put it another way - the missile barely got 250km away from the DPRK. It was nowhere near Japan. The following from Google earth. The DPRK missile sites are in the north, not that it really matters. The white line is a 600km line from Japan into the Sea Of Japan. I guess the media thought it best to panic people by giving us the number in terms of distance-to-a-friendly country rather than distance-from-source. More interesting is that if you trace the coastline of Japan 600km out into the Sea Of Japan (the red line), most of the line actually runs through the DPRK itself, so if the missile was fired from the south, it barely travelled 50km.
Post a Comment
Read more

July 05, 2006
Sigh . 37. Last night was fun. The street was a lot more lively than last year and this morning I had to spend a good half an hour picking the assorted bits of spent artillery out of our lawn(s). Bill and Laurie and the kids came over again, again with a trunk full of (il)legal fireworks. The most entertaining ones were the 'great balls of fire'. They looked innocent enough but turned out to be mortars that fired their payload w-a-y up into the sky - way above the treetops - before exploding. Sweet.
Post a Comment
Read more

July 04, 2006
We watched the Shuttle launch on NASA TV today and it all went off without a hitch. So much foam and ice came off the external tank it was like a snowstorm over the orbiter's left wing but that's normal, and none of the major news channels have picked up on it yet.
Post a Comment
Read more

July 03, 2006
Sigh . This just isn't news really, but as you might expect, England fans went on the rampage after Portugal beat England in the World cup.....by attacking random Portugese families. ( BBC ). It's a fucking game, people. It's really not very important. Certainly not worthy of rioting and racist attacks. I'd have loved Holland to get further than they did, but I didn't go around finding Portugese natives and beating them to within an inch of their lives. That's because I understand that its a game. I understand that it counts for nothing and means nothing. In the grand scheme of things, who wins the World Cup is about as important as whether or not I have white grubs in my lawn.
1 comment
Read more

July 03, 2006
NASA scrubbed two launches over the weekend and have decided to go with a launch tomorrow - Independence Day. If management overrule the engineers, which seems likely, I guess NASA are going for the record of the world's largest fireworks display on the 4th.
Post a Comment
Read more

July 02, 2006
Our cat was very fractious last night and I discovered why this morning. User error. Cat 1.0 booted up at 4:30 because I forgot to leave the DryFood() subroutine running overnight. I live and learn.
Post a Comment
Read more
More posts