October 22, 2005
On October 26th last year, I blogged about the sum total of spam I'd had to date. I felt a little update would be amusing. According to the spam, I now own 521 Rolex replicas, 88 Luis Vuitton handbags, $122.1bn in Nigerian cash and have a 4.4mile long penis. I also have 608 mortgages totalling some $180,302,200, 22,400 years supply of Viagra, a stash of porn tall enough to reach mars, and 73 hours of video of "Busty young amateurs". On top of that I'm lucky enough to own part of 201 timeshares, have been on a staggering 47,205 blind dates, and have a humidor stuffed to the rafters with over 65,000 Cuban cigars. Those are updates from last year. New for the previous 12 months, I apparently now have had 244 holidays with free airline tickets, dated 801 "fuckbuddies" in my local area and received hot stock advice on 529 different companies. I own enough Prozac, Valium, Cialis and Viagra to start a drug dealership. I have been specially selected in 356 online p
Post a Comment
Read more

It's called "Reap what you sow".

Ford are busy learning an important lesson : reap what you sow. You see the production of their new mid-range Fusion family sedan has had to be halted because one of their suppliers is having difficulty supplying parts. Collins & Aikman Corp. provides instrument panels, door panels and trunk systems for the Fusion. The problem is that they are in Chapter 11 bankruptcy protection. How did they get there? Because Ford lowballed them on parts supply costs. Otherwise known as Karma, or Yin and Yang. Trying to find an image on the Ford Fusion website is a chore. It's suffering one of the worst attacks of Mystery Meat navigation in the history of the internet. But I slogged on to see what all the fuss was about. Looks promising.... Nice lines.... Stylish, even?.... Holy shiat! I think I just threw up a little bit in my mouth. After the fantastic-looking 2005 Mustang, Ford apparently fired that designer and had the Fusion scribbled out by one of their talentless, blind monkeys
Post a Comment
Read more

October 21, 2005
Someone asked me today for my cellphone number. I replied "Well I've got one but its never turned on unless we're using it to call out." The response was "oh, why?" but the tone of voice was as if to say "I'm sorry to hear you've got cancer". I don't get it. It's becoming a social stigma. If you don't have a cellphone, people treat you like you're somehow diseased, as if there's something hideously wrong with you. Here's a newsflash : from my perspective, if you can't live without your cellphone and simply must speak on it everywhere you can, then you are the one with the disease - there's something wrong with you, not me. Apart from the fact that you're irradiating your brain at close quarters every time you use it, I'd like to know how you can't live without a piece of technology which until 10 years ago really wasn't available to the public.
Post a Comment
Read more

End of days my arse. 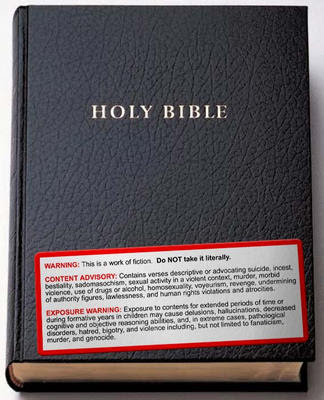 Okay this has got to stop. When a big organisation like MSNBC starts reporting on the End Of Days, ( see here ) you know something is wrong. It seems that a rash of disasters in the last year (earthquakes, tsunamis etc) have got religious groups devoted to watching for the End Times whipped up into an absolute frenzy. These people look at every news event through a biblical lens, which magnifies the smallest detail out of all proportion. The most commonly cited biblical passage describing the beginning of the end has now turned up on MSNBC. "nation shall rise against nation, and kingdom against kingdom: and there shall be famines, and pestilences, and earthquakes," and "And there shall be signs in the sun, and in the moon, and in the stars; and upon the earth distress of nations, with perplexity; the sea and the waves roaring." Come on people - settle down. Remember that first and foremost, the Bible is a story - a work of fiction - a collection of fables and ya
1 comment
Read more

Makes me laugh. Amex have billed me for 20¢. Seriously. It cost them 37¢ to mail the bill to me, and it had 4 sheets of paper and a flyer in it, so it actually probably cost them closer to 80¢ to bill me for 20¢....
Post a Comment
Read more

October 19, 2005
We spoke with Terri last night - still no sign of Tubbers. I think we all know he's gone now. She used a turn of phrase which was fairly upsetting - she said she was worried that someone might have hit him with their car, stopped, gone back and seen it was a cat and then "just thrown him away". That's horrible to think someone might have treated their pet as simply trash :( Meanwhile Wilma picked up overnight from a cat2 to a cat5 hurricane with the lowest pressure ever recorded - 884mb. It has developed a "pinhole eye" which apparently is an eye which is really small compared to the "normal" hurricane. Like a figure skater pulling her arms in whilst spinning, a tight pinhole eye in a hurricane means very high rotational wind speed. They reckon 175mph already. The worrying thing is it's not even got to the warm water in the gulf of mexico yet, and the high winds from the southwest are almost certainly going to turn this one towards Tampa. If
Post a Comment
Read more

Cheney out, Rice in?

October 18, 2005
You sometimes you think things are bad, but couldn't possibly get any worse? Rumour has it that Dick Cheney is about to step down and be replaced with (wait for it) Vice President Condosleeza Rice. I'm sorry. I think I just threw up a little bit in my mouth. That raises the very grim spectre of Rice running for President in 2008. Which could make for an extremely interesting presidential race, especially if the other candidate is Hillary Clinton.....
Post a Comment
Read more

This cement brought to you by PC Laptops?

October 18, 2005
I know I live in the country where advertisers believe that carpet-bombing the public with commercials works (note to advertisers : it doesn't), but this morning I saw something new which actually took me by surprise. A cement truck with a pair of adverts on the mixing barrel. As the barrel rotated, so the adverts came into view. (These were for a local laptop company). It's all very well, but the barrel is circular which means that as the ads rotated to the other side, they were upside down. It was all a bit bizarre.
Post a Comment
Read more

October 17, 2005
Almost everything in our house seems to have been put in with future modification and remodelling in mind. And everything seems to be built to standard. The guy who built the house knew what he was doing. Which is why it was a surprise to me that he didn't put cutoff valves on the downstairs bathroom sink. So I dutifully got a mini pipe cutter, and after discovering the pipes were non-standard half-inch outer diameter copper, managed to get some compression fittings and set to work. Well the first compression fitting worked fine, but the valve I tried to screw on to it leaked like a sieve. So one lash-up later, we had water on in the house overnight until I could get to my favourite plumbing supply shop this morning. There I got two different compression fittings and two new valves. The first one again went on fine, the valve went on, no leaks. Sweet. The second one leaked and leaked and leaked. Down the wall, into the electrical socket, which then started buzzing. So I kicked off
Post a Comment
Read more

October 17, 2005
This is interesting. Kevin Harvick called on NASCAR to halt Saturday night's race at Lowe's Motor Speedway after a rash of exploding tyres. A smooth, sleek surface at the raceway was the result of the track developers using a grinding process on the asphalt twice as a temporary fix until it could be repaved. It resulted in speeds that proved too fast for the tires Goodyear provided. The race was interrupted by a record-breaking 15 cautions, 12 of which were for exploding tyres. The drivers were pissed off. The TV crews were pissed off. The teams were pissed off, and the spectators were pissed off. Yet they all accepted it for what it was. Think back then to the F1 race at Indy this year, where for exactly those reasons, the Michelin teams retired before the race. Rather than risk exploding tyres, they opted not to race. Yet there, the spectators whinged and moaned and got their money back. So from this we can deduct that's okay for NASCAR to have exploding tyres and stop a
Post a Comment
Read more

Anyone remember how SARS was going to kill us all ?

October 16, 2005
I'm not all that worried about bird flu. There's no evidence that it is going to spread to humans. So who or what is pushing everyone's panic buttons this time? One guess. There's always a crisis. Anyone remember when SARS was going to sweep the planet and kill millions? The conspiracy theorist in me says that people have become complacent about SARS. They're educated, the hospitals and doctors know what to look for, and any further outbreaks can be contained with some effort. So clearly the public isn't worried about that any more, but a calm populous isn't easy to control. And controlling the public through fear is what B*sh is all about. Ah yes. B*sh. One word : "Bioshield". Look it up. Project Bioshield is a $5.6 billion program B*sh signed into law in July 2004 that would strip U.S. citizens of any recourse in the event that the feds decide on certain health-care remedies. These include the mandatory application of unproven vaccines to count
1 comment
Read more
More posts