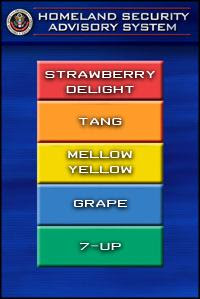 And so with the Iraq handover complete, El Busho turns his attentions back to trying to scare the cr*p out of the American public by diverting attention away from Iraq and back to Al Qaeda. Remember of course that just 18 short months ago, Al Qaeda had been defeated and was no longer a threat. Officials say Tom Ridge thinks it is time to again raise public awareness. Because there is no plan to raise the threat level and only general information, some Democrats privately have questioned whether the timing of the announcement is politically motivated. They note that the latest information from the Bush administration about possible terrorist attacks comes the same week that the Democratic presidential ticket made its debut, garnering significant media attention. And of course it's nothing to do with failing numbers and the soaring popularity of Farenheit 9/11. So the plan then. Let's see. Scare everyone now with non-specific warnings of vague threats. Tell everyone that
Post a Comment
Read more
July 08, 2004
WOW! A 10-disc Matrix DVD Box set is on the way....! Check out the HMV listing from England. DVD1: The Matrix - With All-New Transfer & Audio Commentary DVD2: The Matrix Revisited – Original Version With Behind-The-Scenes Footage DVD3: Matrix Reloaded Extended Version – New Cut With 55 Minutes Of New Footage Inserted Back Into The Film DVD4: Matrix Reloaded Revisited – All New Interviews, Scene Dissections And More! DVD5: Matrix Revolutions – Original Cut With Audio Commentaries DVD6: Matrix Revolutions Revisited – A Host Of All-New Extras DVD7: The Animatrix DVD8: The Roots Of The Matrix – 3 Hours Of Features DVD9: The Burley Man Chronicles – The People Behind The Matrix Discuss Their Work DVD10: The Zion Archive – A Tour Of Matrix Design Concepts, Storyboards & Drawings The box also Contains 20-Page Soft Cover Matrix Booklet.
Post a Comment
Read more
July 08, 2004
The Missing marine that was kidnapped, beheaded, not beheaded, released, not released, released to family and now in Lebanon, released to family and now in Lebanon but which that time was a hoax -- is now sitting in a U.S. Embassy in Beirut. Maybe.
Post a Comment
Read more
July 08, 2004
Cha-ching! . And I claim my $5. From the news wires today : "TRIPOLI, Lebanon - The U.S. Embassy said Thursday it has "credible information" that a missing U.S. Marine is in his native Lebanon, and the military said it was investigating the possibility his disappearance was a hoax."
Post a Comment
Read more
July 07, 2004
Meanwhile , back in Washington... El Busho's White House is purging, censoring and blacklisting scientists and engineers whose work threatens the profits of the Administration's corporate paymasters or challenges the ideological underpinnings of their radical anti-environmental agenda. Indeed, so extreme is this campaign that more than sixty scientists, including Nobel laureates and medical experts, released a statement on February 18 that accuses the Bush Administration of deliberately distorting scientific fact "for partisan political ends." For example : Despite the Environmental Protection Agency's claims that air quality was safe in downtown NY in the days and weeks after 9/11, many people fell ill. There were nine EPA press releases between September and December of 2001 reassuring the public about the wholesome air quality. It's since transpired of course that the government was lying to us. An Inspector General's report released last August revea
Post a Comment
Read more
July 07, 2004
Remember that West Jordan marine who was beheaded but then wasn't beheaded? Today he called his family from Lebanon but has now not called his family from Lebanon. Tomorrow he'll be flying home whilst staying put, and on Friday he's scheduled to desert the army whilst signing up. This whole debacle is seeming more and more like attention-grabbing to me. It's got me wondering if this guy deserted or not, or even if his "abduction" was just a setup to get press attention. Given the hostage-takers scant regard for life, and constant beheadings, it does seem rather odd that this time they just let him go because he promised not to go back to the U.S. Army. The plot thickens (and doesn't thicken).
Post a Comment
Read more
July 06, 2004
Tony Blair finally admitted he's a red-faced liar today. Now can we get rid of him? British Prime Minister Tony Blair has said weapons of mass destruction may never be found in Iraq. That's enough of an admission of guilt for me. Where do I sign up to watch the impeachment / removal proceedings? The funny thing is that the quotes are full of holes: "We know that Saddam Hussein had weapons of mass destruction and we know that we haven't found them." Ok - how do we know this? "I have to accept we have not found them, that we may not find them. "Whether they were hidden or removed or destroyed even, the plain fact is that he was in breach of United Nations resolutions." Good. Makes sense. But it does rather require PROOF doesn't it? So Blair summised that Saddam had WMD based on a 10 year old plagiarised thesis, and despite the fact the Bush and Powell themselves originally told us it was "impossible" for him to have
Post a Comment
Read more
July 05, 2004
Happy Birthday to me :-)
Post a Comment
Read more
More posts