July 09, 2005
Kudos to Steven Spielberg, who has finally redeemed himself for the last 20 minutes of "AI" with the excellent War Of The Worlds. We went to see it last night. The story was as good as its ever been, but Spielberg's vision of the Martian Tripods was just goddamn scary. He's also pulled off the best reveal in film for a long time as the first tripod emerges from the ground under an intersection. The design and scale of them is truly massive and, for the first time, a genuinely terrifying vision of mechanised warfare the likes of which, if it ever really happened, would render all of our military powers totally useless. The sound engineers on the film need to get some sort of award. The tripods sounded like they were powered by a rhythmic combination gas turbing and jet engine, and the martian 'trumpet' signal was just blood-curdling. This is an absolute must-see movie if you like sci-fi, and it will be heading to our DVD collection as soon as possible.
Post a Comment
Read more 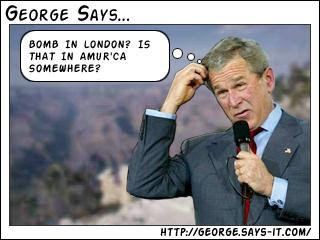 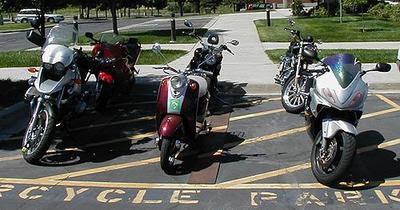 Some joker is taking the piss at work today. Check out the little Italian scooter in the bike park.
Post a Comment
Read more

Of profiteering hotels and scared Americans.

July 08, 2005
It's nice to know that in the face of yesterday's bomb attacks in London, the closure of the transport system and the massive human suffering, hotels in the area were kind enough to triple their prices for those unfortunate enough to be stuck in London. Yes, profiting from human suffering is alive the thriving in London. Commuters said they were appalled, and thousands chose to walk for hours to reach home rather than stay the night in a hotel. £80-a-night hotels shot up to £250 a night. Nice. What's truly sad is that despite published statements today indicating no link to Iraq, no link to Al Qaeda, no link to muslims and no evidence of suicide bombers exists (ie. it could very easily have been the IRA), America has knee-jerked into panic again. Why is it that Americans panic so damn easily? The news last night told us how local law enforcement had stepped up vigilance on the tram system here in Salt Lake City. Then they interviewed a few people, all of whom expressed th
Post a Comment
Read more

July 07, 2005
Lets suppose for a minute that today's bombs in London were the work of some bunch of disgruntled middle-easterners. I still don't think it was - it was too organised. But lets say it was. What if they were aiming to demonstrate the worst case scenario? Cripple the transport infrastructure, knowing it would bring the city to a stop. Knowing the emergency services now have their hands full, dump something nasty into the water and a couple of well-placed bombs to kill the electricity grid. It doesn't bear thinking about if that is the case. My money is on the IRA, something to do with the G8 summit, or some disenfranchised French group pissed at losing the Olympic bid.
Post a Comment
Read more

The IRA for the historically-challenged.

July 07, 2005
In case anyone wonders why I believe today's attacks to be the work of the IRA, here's a little history lesson. IRA bombing 101. Those items in bold were in London. Those in red/bold were IRA attacks on London transport, just like today. Friday, September 30, 1983 Terrorists destroyed stores, filling stations, bars and government offices in a bomb and arson blitz across London, police said today. No injuries were reported. Police Inspector Jim Boyd said damage was estimated at "tens of thousands" of dollars. Police blamed the outlawed Provisional IRA. Saturday, December 17, 1983 A terrorist car bomb exploded today outside famed Harrods department store, killing at least nine people, including four police officers, and injuring scores of Christmas shoppers and others in the area, authorities said. Police said they believed the outlawed IRA set off the blast in a holiday terrorist blitz. Friday, October 12, 1984 (AP) -- Two large explosions early today heavily
Post a Comment
Read more 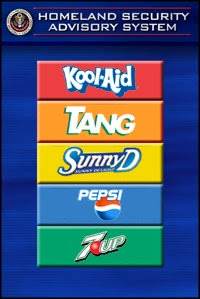 As if you couldn't have predicted this : Homeland Security have raised the alert level here in America to Tang. Horse running across field. Stable door now closed.
Post a Comment
Read more

July 07, 2005
See my post yesterday about the London police's incapacity to be able to stop any act of terrorism? Sadly, it only took 24 hours to prove me right. This morning, multiple bombs have gone off on the tubes and buses in London, crippling the city and killing at least 37 so far and injuring over 700. Some previously unheard of group claiming to be a radical European arm of Al Qaeda has claimed responsibility but that seems highly unlikely. This smacks of IRA to me. If it does turn out to be related to Iraq, perhaps now Blair will listen to the majority of the public, stop supporting B*sh, and get the fuck out of Iraq. Of course B*sh hopped on the bandwagon instantly and blamed Al Qaeda and trotted out one of his "we must fight terrorism wherever it is" speeches. The simple fact is this : if this is tied to Iraq, then it wouldn't have happened at all if B*sh hadn't invaded the country on a lie. Pot. Kettle. Black. Who is the terrorist to blame here? It really irrita
Post a Comment
Read more

Freedom of speech on trial

July 06, 2005
As I predicted in my blog on Monday, a US court today jailed New York Times journalist Judith Miller for refusing to testify in an investigation into the unmasking of a CIA agent in 2003. The leaking of Valerie Plame's name was a federal offence, yet the name came from someone inside the B*sh camp - probably Karl Rove. Prosecutor Patrick Fitzgerald is investigating who leaked the name during a row over evidence used to justify war in Iraq. He had argued last week that both journalists, who had looked into the leak, should be jailed for their refusal to reveal their sources. Simple fact, people : journalists must be allowed to keep sources confidential in order to preserve freedom of the press. By jailing Miller, the US government has effectively drawn a line in the sand on the issue of free speech. Say what you like, but make sure you say what the government want. 1984.
Post a Comment
Read more

Another right to be stripped away.

July 06, 2005
The problem: 40percent of death sentences are overturned in Federal Court. The solution: Eliminate apeals to Federal Court. You read it right. Republicans in Congress have launched a new effort to speed up executions by limiting the ability of those sentenced to death to appeal to federal courts. They've called it the "Streamlined Procedures Act of 2005," and it's been introduced into the House of Representatives today. The idea is that it would limit the ability of defendants facing the death sentence to have their cases reviewed by federal courts in what are known as habeas corpus appeals. Take a moment and examine the parallels between what's going on in the B*sh/Republican-run country right now versus what happened in Germany prior to WWII.
Post a Comment
Read more

July 06, 2005
Bribery . That's the only possibility, because nobody who's ever been to London or who lives there would ever be under the misconception that London could host the Olympics. For starters, neither airport has the capacity or capability to deal with that sort of influx of people. To go on, the transport infrastructure is on its knees already - just with everyday Londoners the trains and buses are over capacity and nothing ever runs on time. It's taken 15 years of arguing to get the cross-London link approved, and almost as long to sort out the Channel Tunnel link. Do the IOC really believe that within 7 years, London can sort out its transport crisis? What about facilites? There are none. It's all very well claiming 'regeneration of the East End' will solve it, but where's the money going to come from? The damn politicos keep saying it's going to be of benefit to the whole country, then let the whole country pay for it! London already funds the rest of the
Post a Comment
Read more

July 05, 2005
36 today. Feels like - well - like it did yesterday, only a little more tired from the 4th July gig last night. I reckon my dad is psychic. One of the things I had on my wishlist was a home weather centre. Nerdy I know but so what. A couple of weeks ago, he called my wife, and without knowing about my wishlist, asked if she thought I'd like a home weather centre. Weird! Also got the box-set of Keen Eddie from Paula. Sweet.
1 comment
Read more

July 04, 2005
B*sh is edging ever closer to outlawing free speech. This time it comes in the form of splitting hairs over the definition of "journalist". The Republicans are trying to force through a federal reporter's shield law, which would shield reporters from having to give up the names of their sources. HR581 and an identical Senate bill, S340 are a double-edge sword. On the one hand, it means that the government can influence reporters to tell the news as the government sees fit, safe in the knowledge that the shield law means the reporter won't give up his source, thus the government could never be implicated in controlling the news. On the other hand, the wording of the law is such that it would exclude bloggers, freelancers and all journalists "without contracts or those who publish solely on the web". Oddly enough, all the types of journalism which are free of the desire to tell the news as the government would like. Freelancers and bloggers are where the fr
Post a Comment
Read more

July 03, 2005
A friend of mine from the East coast is in Utah at the moment and we met up this morning to take the bikes on a day tour into the mountains. The route we ended up doing was great. We started in Salt Lake, then went up Emigration Canyon and left at Mountain Dell reservoir. We took the East Canyon over to East Canyon reservoir, which could have gone better. The road had been resurfaced with gravel chips, and at one point we had a rockfall, gravel, rain, oncoming traffic and sheep on the road all at the same blind bend. Anyhoo from there we took SR66 to Morgan, then on to I84 west to the south end of Trappers Loop. A quick pit stop to massage sore bums and top off on fuel and then north through Trappers Loop to Weber, and east on SR39 over Monte Christo to Woodruff. Monte Christo is by far the best biking road in Utah that I've been on so far. From there we took SR89 south and into Wyoming to the town of porn and fireworks; Evanston. And from there it was a long slog on I80 back thro
1 comment
Read more