March 31, 2006
How many times do we have to say this : B*sh is a liar. Another memo "leaked" out yesterday which proves that B*sh is a warmonger with no regard for the UN or even his own military intelligence. Stamped "extremely sensitive", the memo comes from a closed-door meeting in the Oval Office on January 31st 2003 between B*sh and Blair. B*sh makes it totally clear that he is determined to invade Iraq without any second UN resolution, and even if the arms inspectors failed to find any WMD. The memo even details that B*sh had planned to start bombing Iraq on March 10th. Verbatim: The start date for the military campaign is now penciled in for 10 March. This is when the bombing will begin. Remember that this meeting took place in January, so when B*sh stood in front of the nation in March and said he didn't want to go to War, and that it wasn't inevitable, and that he wanted to wait for the UN sanctions, he was flat out LYING. When he later said the invasion was ba
Post a Comment
Read more

As Einstein said, it's all relative.

March 30, 2006
It's interesting how perceptions change. 10 years ago, if you told someone you had a PDA, you'd likely have to describe it as "an electronic filofax". Now, if you mention Filofax, you have to describe it as "a paper version of a PDA". Why do I blog about this? The word 'filofax' came out in a conversation I had this morning and the person I was talking to looked like a dog that had just been shown a card trick. I had to explain to him what a filofax was.
Post a Comment
Read more

Can we get any dumber?

March 29, 2006
Apparently it's not bad enough that the common perception of the average American is "dumb". No. Corporate America is going to ram this idea down our throats with a vengeance. I'm talking, of course, about the new Jeep Commander commercial on TV. Very artsy, driving underwater using the three sunroofs as if they were an aquarium. And then there it is on the bottom of the screen : Fictionalisation. Vehicle not suitable for underwater use Oh come on! Nobody actually needs to be told that do they? Or are Jeep buyers really so retardedly backwards that they're going to try to reproduce the advert with their own car?
Post a Comment
Read more

A State Of Trance episode 141 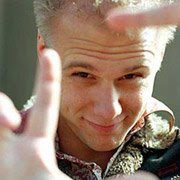 I don't know how he does it, but every now and then, Armin pulls one out of the bag that makes you do a cartoon double-take. Wha-what? Episode 141 of his ASOT radio show is just such an unbagging. About 50% of the tracks are new, 50% are from previous shows, but he's chosen versions and mixed them together in such a way that I'm sitting here with a wraparound grin on my face. Part of the chair ravers society, that's me.
Post a Comment
Read more

March 28, 2006
My mum's mum finally died on friday morning last week. Fortunately it wasn't a shock - she'd been in hospital for a few weeks and it wasn't looking good. It's really odd thinking about it because she's not around any more. She won't be coming to Christmas with my parents any more. We won't be going to her apartment any more. It's sad. Her funeral is on friday this week but we're not going to be able to make it back to England for that which is a shame. My dad's mum died about 15 years ago I suppose, and I never knew either of my granddads. So that's the end of that generation of our family.
Post a Comment
Read more

A380 sails through its evacuation drill

March 27, 2006
The final hurdle for the air certification of the A380 was sailed through yesterday. The CAA and FAA require that 650 passengers can be evacuated in 90s with half the emergency exits closed. Airbus managed 852 passengers and 20 crew in 80 seconds. The spread was 30% over the age of 50 and 45% women with 3 carry-on babies (represented by dummies). 32 people were injured and one person broke a leg. That's about average for these checks.
Post a Comment
Read more
More posts