Questar Gas are raping us blind

December 17, 2005
$135.48 ! That's my gas bill this month. Same month last year, when the price of a barrel of oil was nearly identical? $87.51. It even shows it on my bill in decatherms per day - last year 0.33, this year 0.34 But the cost per day has shot up from $2.92 to $4.67 They're profiteering, obviously. We've got a frickin oil refinery on our doorstep - if I stood on the roof of my house I could see the flames from the refinery stacks. Yet we have petrol over $2 a gallon and natural gas at record highs. If the price of oil is the same, then it can only be one thing : corporate greed, as promoted and backed by B*sh. This is all because Jon Huntsman fired the consumer protection guy - Roger Ball - for fighting too hard for the consumer. Result? Nearly double the price for utilities thanks to a closed-door meeting with the division of "consumer protection" and Questar.
Post a Comment
Read more

A wrap up of this week in Bushworld.

December 16, 2005
B*sh approved and allowed the NSA to spy on his own citizens without cause and without court orders. What a shocker. There was another world leader who did the same thing some time ago. Around 1939. The NYTimes broke this story today and confirmed that worse still, White House asked it not to publish the article, "arguing that it could jeopardize continuing investigations and alert would-be terrorists that they might be under scrutiny." Wow. Spying on its own citizens and suppressing the media, all in one day. I'm impressed! B*sh of course won't confirm or deny this (his words) "can't discuss specifics because it would compromise our ability to protect the people" . Excuse my French but that's bollocks A 1978 law, the Foreign Intelligence Surveillance Act, makes it illegal to spy on U.S. citizens in the United States without court approval. It's Americans spying on Americans. Why does that sound so familiar. Oh yes. Tom Ridge in his July 2002
2 comments
Read more

December 16, 2005
How frickin' difficult can it be to remember to indicate before slamming on the brakes when driving? Not once, not twice, but three times this morning I was caught out by stupid Utah drivers jamming on their brakes in commuter traffic, bringing an entire lane of traffic to a stop then indicating and turning. Employing a little brain power, common sense and courtesy by indicating first would have allowed the rest of the traffic to make provision for them turning off. But no - best to just nearly cause an accident by stopping suddenly for no reason. The third of the three wasn't even at the proper turning, and naturally wasn't even on the proper side of the road. Once they'd figured out they were at the wrong turning, they accelerated again in the same lane, then drifted across three lanes to the left (no indicators of course) nearly running into two cars and a motorbike, and turned left (across traffic) (with no indicators) (without looking) nearly causing a fourth acci
Post a Comment
Read more 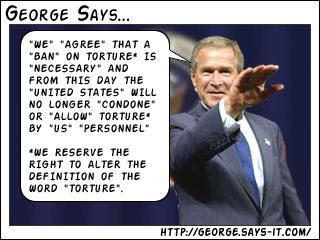 December 14, 2005
One of Microsoft's published goals with the Xbollox360 was to capture and take over the Japanese gaming market. This weekend marked the beginning of that onslaught. Feverish queues of eager Japanese gamers snapped up 62,135 machines over the weekend. Or to put it into perspective, only 39% of the 159,000 units that were shipped to stores. Believe it or not, this launches the Xbollox360 off to an even slower start than the original Xbollox in Japan. The original black space heater shifted nearly double the number in its first couple of days - 123,000 units. So I guess their quest for the Japanese market has fallen flat on its face - more so than the original launch. Which is terribly funny. Roll on the PS3.
1 comment
Read more

December 14, 2005
Hell has officially frozen over: "President" B*sh today accepted responsibility for going to war in Iraq based on faulty intelligence. "It is true that much of the intelligence turned out to be wrong. As president I am responsible for the decision to go into Iraq." At least he's finally accepted responsibility. Now if he'd just stop blaming "faulty intelligence" and admit that he's a warmonger, we'd be getting somewhere. After all, it was B*sh who decided to invade before the weapons inspectors could finish their jobs, and thus by ignoring the weapons inspectors, he proved he was ignoring intelligence. The actual intelligence was not faulty at all, but he still feels he has to blame someone other than himself. Of course this admission of guilt has nothing to do with trying to bolster his numbers before next year's mid-terms.
Post a Comment
Read more

B*sh gives first indication of how much he values human life.

December 12, 2005
In a press conference today, B*sh admitted that possibly 30,000 Iraqi civilians had died since the beginning of operation Iraqi freedom, or whatever the current moniker is. He shrugged it off as if it was nothing important, as if it was just an everyday occurance. As if, in fact, he wasn't responsible for it. So he's admitted that because of America's invasion of Iraq, 30,000 civilians have died as a direct result. And shrugged it off. Let's just say that a little more loudly : Bush has admitted America's involvement in Iraq has cost 30,000 civilian lives. Quick history lesson for you, and a little bit of maths. Conservatively, Saddam Hussein is said to be responsible for the deaths of 500,000 Iraqis during his 20 year regime. By the numbers, lets say 25,000 a year. B*sh is responsible for the death of 30,000 Iraqis in slightly under 3 years, lets say 10,000 a year. Ok the B*sh apologists will say "2 and a half times less than Hussein" but that's not
Post a Comment
Read more

Armin nails it - and hides it.

December 12, 2005
I let my rip of Armin Van Buuren's "Shivers" overrun today - never listened to the whole CD before - always stopped after the last track. But I let it run on and at 70 minutes and 4 seconds is one of the best renditions of Jerusalem I've ever heard, and I'm not religious by any stretch of the imagination. Quite how I'm not sure but the bass pipes sound as if you're standing in an actual cathedral. I didn't know CD's or MP3s could capture that much range. Nicely done Armin - and well hidden. And did those feet in ancient time Walk upon England's mountains green? And was the holy Lamb of God On England's pleasant pastures seen? And did the Countenance Divine Shine forth upon our clouded hills? And was Jerusalem builded here Among these dark Satanic mills? Bring me my bow of burning gold! Bring me my arrows of desire! Bring me my spear! O clouds unfold! Bring me my chariot of fire! I will not cease from mental fight, Nor shall my sword sl
Post a Comment
Read more

Keeping up the fear.

December 11, 2005
The government's mouthpiece (CNN) took only 42 words to mention terrorism as the possible cause of the oil refinery explosion in Buncefield back in England today. The BBC website doesn't mention it at all. In fact, most reports on non-American websites attribute it to an accident, despite generating the largest peacetime explosion in Europe. Most American websites, on the other hand, mention the "T" word in the opening paragraph. They all eventually get around to it being an accident, but the mere fact that they mention terrorism is indicative of what a stranglehold the Whitehouse has on the press over here. Any opportunity to keep the population scared. CNN - 1st paragraph. ABC News - 3rd paragraph. Fox News - Entire 5th paragraph, and tying in Al Qaeda too - impressive. CBS News - 2nd paragraph. BBC news - no mention of terrorism. ITV news - no mention of terrorism. Sky news - no mention of terrorism. And so on and so forth.
Post a Comment
Read more
More posts