October 12, 2006
Here's a good one for you. I put a new graphics card in my PC a couple of months ago - an Nvidia 6600, and since then have had nothing but trouble. Corrupted disks, slow booting, lockups - all sorts of problems. Having had enough, I took it out tonight and put the old card back in - an old GeForce4 Ti4600. The first thing I noticed - the PC took about half as long to boot and get into Winblows. Everything is running quicker and I'm not getting the blackouts on screen every 20 minutes or so. I'm sure I don't understand this so I'm going to pump our friendly IT bloke for ideas tomorrow. Luckily NewEgg.com have given me an RMA for the new card so I can get a replacement and see if it does any better. But why a quicker card would cause so many problems on my PC is a total mystery.
Post a Comment
Read more

October 11, 2006
A light aircraft crashed into a building in New York today. Without waiting for actual news, CNN went into a terrorist blitz. Turned out it was some baseball player who was flying his own plane and had engine trouble. No less, here's some of what CNN were reporting: The twin-engine plane came through a hazy, cloudy sky and hit the 20th floor of The Belaire -- a red-brick tower overlooking the East River, about five miles from the World Trade Center -- with a loud bang, touching off a raging fire that cast a pillar of black smoke over the city and sent flames shooting from four windows on two adjoining floors. Well first of all, the whole bit about the WTC is totally unnecesary - it has nothing to do with the story other than to scare people. 5 miles? That's not even fucking close. If they were doing it as a geographic landmark, one of the bridges right next to the building would have been much better. Onwards: Large crowds gathered in the street in the largely wealthy New
6 comments
Read more

October 11, 2006
Jeebus . The ride to work was cold this morning. It was a balmy 4°C. Bike worked well though, with the colder, denser air. The sun's come up now and the temperature has shot up to 8°C :-)
Post a Comment
Read more

A long and full weekend. 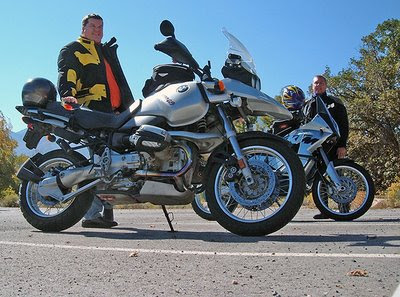 Well that was fun. The first of my alternative fridays off made for a three-day weekend. I collected my season pass for Solitude on friday, sort of fixed the PC (maybe) on saturday, and today went for an awesome bike ride with Mike starting at Mount Nebo Loop (again) and this time going south and east from there via Moroni, Mount Pleasant and Fairview to have lunch in Huntington. My GPS ran out of datapoints the ride was so long, but I know it was 265 miles and we peaked at 9,970ft. SR31 down to Huntington was just incredible - the sort of road full of sweeping turns I've only ever read about in bike magazines. For one section I think we went for a good 10 or 12 miles without a single straight section. All turns, all the way. Sweet. The return route went up through Price and Helper then took in a bit of highway 6 before going off down through Scofield state park to get back to Fairview. From there we slogged it up SR89 and highway 6 back to Payson. If you've got Google Earth,
Post a Comment
Read more
More posts