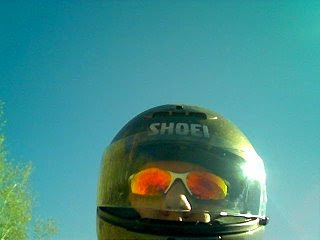 Wheeee . Got the new tyres fitted to the bike last night - I'm not travelling around on squared off jobs now. Brand new Avon Distanzias. What a difference - the bike actually turns again! I christened them today in on of our off-site motivational seminars (ie. bike rides). We did 200 miles from the office south down the west side of Utah lake, through Goshen Canyon and down to Nephi. We stopped for lunch there then did the Mount Nebo Loop to get back to Payson, then the long slog back up I-15 home. There was a crash on I-15 and every fibre of my being said "filter dammit!" but it's illegal here so we were stuck in hot traffic. True to form with my ability to witness accidents right in front of me, about 10 miles further on, the traffic slowed and five cars in front of me there was an eruption of smoke as some tosser in a Dodge Neon slammed into the side of a minivan. I couldn't be buggered to give a witness statement this time - too hot to stand around, so we went
2 comments
Read more

September 28, 2006
Well this is bad news. Apparently for the PS3, the first Gran Turismo game (GT HD) is going to be based on microtransactions. That is, if you want something in-game, you have to buy it with real world cash. The game will be $50 and come with no cars and no tracks. You'll have to buy cars for about 40¢ each and tracks for about $3 a pop. The game has 50 tracks and 750 cars. So if you want to play the full Gran Turismo experience, previously available on PS2 for $29.99 on sell-through, on the PS3 it's going to cost $50 + $150 for the tracks + $300 for the cars. I tell you what - there's nothing micro about those transactions. $500 for a game? You can fuck right off. I'm a die-hard Gran Turismo fan but there is no way in Hell I am paying for in-game content. This had better be someone's idea of a sick joke. For microtransactions to work, the game needs to be free and the cars need to be 1¢ each with the tracks being $1 each. That would make the whole game $50 for the
Post a Comment
Read more

From the department of the bleeding obvious.

September 28, 2006
On Reuters today: Airline passengers willing to put up with aggressive new airport security measures are enjoying the unexpected serenity that comes from boarding flights with considerably less carry-on luggage. Travelers and flight crew report faster boarding, less competition for overhead storage and frictionless deplaning in the seven weeks since a foiled terror plot in Britain prompted the U.S. government to crack down on carry-on items. Many travelers responded by checking all their bags. An unintended benefit has been a smoother boarding process. Hmm. Well of course this does seem a lot like the true reason behind the 'alleged' 'plot' 'scare'. The airlines wanted more on-time departures. Like I said - there had to be a reason behind it and it had to be to do with money. We have to buy drinks in the 'secure' area now - money for the airports. And with less carry-on, there are less delays - more money for the airlines. Come on people - it's j
Post a Comment
Read more 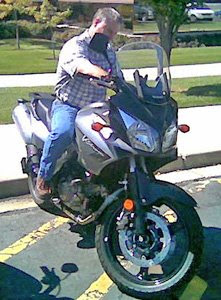 Nephi brought his new bike in today - a gunmetal grey Suzuki V-Strom DL650. Nice. I'm particularly happy because it was one of my recommendations to him when he came asking for advice on a good 'starter' bike....
Post a Comment
Read more

Why isn't it terrorism?

September 25, 2006
You know, if I was a terrorist and I was trying to think of a way to bring fear and uncertainty to a country, I might be inclined to try the roundabout route. For example some e-coli bacteria in the irrigation supply to one of the nation's largest farms. The bacteria would end up on the leaves and in the plants which would be harvested and distributed nationwide, whereupon people would start falling ill and dying. Spinach would be a great place to start. Seriously though - given that CNN etc will blame almost anything on terrorism, it's hard to believe that nobody has even considered that this e-coli outbreak might be something other than random happenstance.
Post a Comment
Read more

September 25, 2006
Hurrah! The TSA has finally come to its senses and realised that a total ban on liquids on aircraft is asinine. We're now actually allowed to take stuff on that we buy in the "secure area", and they're allowing certain sizes of toiletries on board too as long as they're in a clear plastic bag. Perfect. Common sense. It's about frickin time - they had these changes implemented in Europe over a month ago.
Post a Comment
Read more

September 25, 2006
Hurrah! The TSA has finally come to its senses and realised that a total ban on liquids on aircraft is asinine. We're now actually allowed to take stuff on that we buy in the "secure area", and they're allowing certain sizes of toiletries on board too as long as they're in a clear plastic bag. Perfect. Common sense. It's about frickin time - they had these changes implemented in Europe over a month ago.
Post a Comment
Read more
More posts