January 28, 2006
Disaster perhaps? Either way I've got my rented skis, boots and poles and I'm ready to go. Not sure if I'm raring to go yet but we'll see in the morning.
Post a Comment
Read more

How goddamn difficult is it to buy a digital camera?

January 28, 2006
I don't believe this. I have waited patiently to file my taxes to know whether or not I can afford the new digital camera I've been looking at. I go into Inkleys this morning and they don't have any in stock but can express deliver one from the warehouse for $25. No point in that - if I'm going to have to pay shipping I'll buy it off the internet. So then I try phoning all the camera stores in town - nobody has one. Ok fine. I'll get it off the internet. The only two places that sell it on the net are amazon, who want full price (so no deal there), and my favourite store, B&H Photo Video. Except on the B&H site it says "cannot be sold on the internet" and gives a 1-800 number. In desperation I call the 1-800 number only to find the fucking store is closed on saturdays! Their business week is sunday to thursday. What the FUCK? It's not like I'm trying to buy the Holy Grail! It's a fucking camera! And on top of that, my laptop with X
Post a Comment
Read more

January 27, 2006
So my curiosity has finally gotten the better of me. I have to know whether I can ski or not and one of my work colleagues has bravely volunteered to take me up to Solitude on sunday and see what he can do about it. Watch this space.
Post a Comment
Read more 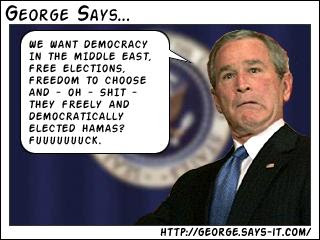 MMmm'yeah. I think that's known as a steaming big bowl of "Be careful what you wish for." Touché
Post a Comment
Read more

The continuing hypocrisy of B*sh

January 26, 2006
B*sh was at some press conference or other this morning, talking about the Hamas win in the Palestinian elections, and he said (paraphrased) "You can't claim to want peace if you want the destruction of another country", referring to the threats to Israel. But America allegedly wants peace, yet America has destroyed Iraq. Then he went on to dither about the NSA wiretapping case and he said "In my mind I have no doubt that wiretapping is legal." Apparently his mind isn't aware of a 1978 law, the Foreign Intelligence Surveillance Act, which makes it illegal to spy on U.S. citizens in the United States without court approval. It just boggles the mind that anyone can think B*sh is a decent human being and a good "President".
Post a Comment
Read more

Today's dose of "America is just fucked up".

January 24, 2006
Four items today. Wisconsin State Assembly passed a bill lowering the hunting age to 8 in their state. What could possibly go wrong? Here's a coincidentally linked story to show exactly what could go wrong : an 8-year-old boy accidentally shot a 7-year-old girl in the arm today - at a daycare centre! I'm sorry but that is fucked up. What the hell is an 8 year old kid doing with a loaded gun in a goddamn daycare centre? And what the hell were his parents thinking? (I guess they probably weren't thinking at all). Black-hating, anti-woman, anti-abortion white supremacist Alito got the nod from the Senate judiciary committee. All ten Republicans voted for Alito, while all eight Democrats voted against him. 8-10: That's a nice balanced government. What happened to 9-9? Someone asked B*sh at a question and answer session at Kansas State University if he'd seen "Brokeback Mountain," since he's a rancher and all. B*sh was caught totally off guard by the quest
Post a Comment
Read more

Yet another reason not to buy Plasma TVs

January 23, 2006
When I see people hauling their huge Plasma TVs out of Best Buy, I think to myself "now there's someone who didn't do their homework". If they did, they'd know a couple of things. 1. They're hot - really hot. And I don't mean in the "hot tech. item" sort of way. I mean hot enough to burn your hand if you touch the screen. Hot enough to heat a whole room. 2. They're noisy - really noisy. They have a rack of fans in the top of the monitor to pull air through to try to keep them cool. 3. They quantise the colours really badly - especially areas of continous colour, like the sky. 4. They are heavy - too heavy to hang on the average wall. 5. They're fragile - it's really easy to crack the screens on them. And today, the next reason appeared : they suffer the old CRT burn-in problem only much, much worse. It used to take months to burn a station ident into the corner of a CRT projector. With Plasma screens, it can happen literally overni
Post a Comment
Read more
More posts