October 14, 2005
This is just retarded. Bloody environmentalists have managed to get the Californian Altamont Pass wind farm shut down because - get this - the area apparently provides a food source for migrating birds. This is the oldest wind farm in America - it's never been a problem before, but apparently a 2004 report by the California Energy Commission found that 880 to 1,300 raptors are killed at Altamont every year. The environmentalists snatched on that nugget of information but completely glossed over the total lack of evidence for the windmills being to blame (ie. the birds were found to have no signs of impact from the mills or blades). Success there has led this lot on to get a wind farm in the Mojave blocked, and one in Nantucket Sound put on hold because of bats. Who in their right mind would block plans for a wind farm in a remote region? It means clean, renewable energy........oh.....right....the oil companies. Now it makes sense. This lot aren't environmentalists at all. It
Post a Comment
Read more

October 14, 2005
We've had some bad news - next door's cat has vanished. We don't know if he's been in an accident, got locked in somewhere or worse. He didn't have a collar and I'm not sure if he was chipped or not. Russ thinks the family at the end of the street might have taken him before they moved out because their kids seemed convinced that Tubbers was theirs. He's a bit of a free spirit but it's really unusual for him to not come home and eat and sleep with Russ and Terri. I think last night was the third night he's been missing so it's unfortunate to have to assume the worst :(
Post a Comment
Read more 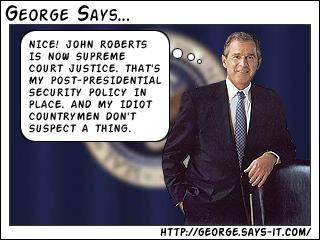 This is too funny.

October 13, 2005
This is too funny. I don't know how long it will last though. Go to www.google.com Type in failure Press "I'm feeling lucky". Believe it or not, at the time of typing, it takes you to the George W Bush bio page on the whitehouse website. The reason for this is explained on the official Google blog here. It seems so many people have linked to this site, using the word "failure" and "abject failure" that PageRank has placed it top of the search results.
Post a Comment
Read more

October 13, 2005
I picked up Paula at the airport last night. She was tired, obviously, but at least the suitcase arrived with her this time :-)
Post a Comment
Read more

Microsoft are pulling out all the stops in a last desperate bid to dominate the home console market. The Xbox360 is due out in less than a month, which they hope will give them a headstart on the PS3 due out next year. The big problem, which everyone is downplaying, is compatibility. As far as we know, Microsoft's line is still (at this late stage), that Xbox games won't work on the Xbox360. They say the top-line games will need some re-coding and will be released in 360 versions. If that's really the case, then they're expecting people to cough up $400 for a machine that won't play any of their existing games. Or $300 for the lower spec machine which doesn't have controllers or a hard drive (ie. its useless). Compare that to the PS3 which will play all PS2 and PSone games. Anti-Microsoft bigotry aside, I can't see how they expect this plan to work. Who the hell is going to pay $60 for another version of a game they already own? Simply stuffing the conso
Post a Comment
Read more 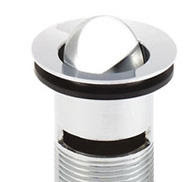 Flip the whothewhatnow? The villa in Mallorca (and a number of hotels in England now) have these nifty flip-top plugs in the washbasins. A captive disc spins around rather than having a plug that you pull out. When closed, its watertight, obviously. So I somewhat nervously went to a plumbing supply shop here called England Plumbing. I wasn't hopeful, but I knew they'd be more use than Home Depot. Naturally, the response was "huh?" and "neat!". So I went to M-one - the funny little plumbing supply shop west of the freeway that was able to help out two years back with my nearly pre-war toilet plunger. Not only did he know what they were, but he had the damn things in stock. I've come to the conclusion that for plumbing in Salt Lake City, I'll not bother with anywhere else any more - I'll just go to this M-one place.
Post a Comment
Read more

October 09, 2005
My suitcase finally arrived today! Backtracking the tags, when it was supposed to go from Palma to Amsterdam via Barcelona, here's where it went: Palma -> Madrid -> Tokyo -> Amsterdam -> Gatwick -> Amsterdam -> Atlanta -> Dayton -> Houston -> Salt Lake City. It actually arrived in Gatwick on a JAL flight on the same day as the other case arrived there from Amsterdam on a BA flight. I guess they then re-read the lost luggage report and figured it actually needed to come to America. Quite how it went wrong right at the outset I don't know. Madrid isn't Barcelona - the airport codes are nothing alike. And then for my case to go to Tokyo whilst Paula's went to Amsterdam - huh? Anyway - it's here, none the worse foe wear except all the chocolate has bloomed and hazed. Still tastes just fine though :-p
Post a Comment
Read more
More posts