September 15, 2005
Good grief - it all went into the suitcases. Who'd have believe that much junk could fit in two samsonites? Tomorrow's the day. The reason I've not been on vacation for over 3 years - storing up vacation days. Bloody Americans - why can't they give 4 weeks vacation a year like every other country? Two weeks my arse. It means you either have to spend three years building up enough time for a decent vacation, or take unpaid leave. Which sucks. Anyway - there might be a blog entry from the Internet terminal at the Punta Reina hotel on the other beach. Then again, there might not.
Post a Comment
Read more

B*sh is a power crazed lunatic

September 14, 2005
Ok all joking and B*sh-bashing aside, this is serious now. The man has to be removed from power, and quick. Why? Because US is considering rewriting its nuclear doctrine for the age of terrorism. A Pentagon planning document, the Doctrine for Joint Nuclear Operations , urged by B*sh, spells out America's willingness to use nuclear weapons in a preemptive strike if terrorists threaten the US or its allies with weapons of mass destruction. This is so bad on so many levels its difficult to know where to start. For one, America's concept of WMD doesn't match the rest of the world - there are only three WMDs - nuclear bombs, neutron bombs, and hydrogen bombs. (The US has all three) Chemical and biological weapons are absolutely not WMD, they are weapons of genocide, and there is a b-i-g difference. And for seconds, B*sh and Rumsfeld have already proven that the concept of a "preemptive war" is flawed and doesn't work, yet have done it. From this we can learn that
1 comment
Read more 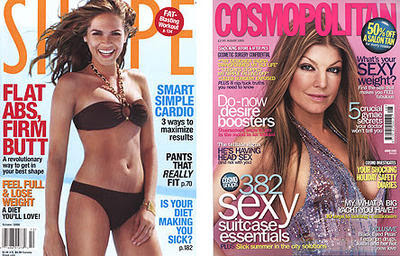 Paula held up the magazine cover of Cosmo a couple of days ago and asked for my opinion of the woman on the front. I said she might have been attractive at one point, but now she looked like she'd been chiselled out of granite by an untrained monkey and airbrushed by a blind man. Women on the covers of magazines do seem to be suffering from the over-zealous use of photoshop at the moment. The woman on the front of my FHM last month is fine inside the mag, but on the cover she looks almost plastic. Then there are some mags which still seem to think that minor blemish removal is fine, but wholesale airbrushing is out of the question. This month's Shape magazine is a good example. I noticed it on top of Paula's stack of magazines this morning. The girl on the front of there is a total hottie and seems to be devoid of all but the most minor retouching. I wonder if its because she looks like a normal person? A hint of a tummy, breastages that aren't the size of the Hindenbe
Post a Comment
Read more

Louis Farrakhan : not an engineer.

September 13, 2005
Minister Louis Farrakhan (who?) has pulled the race card today with this statement at a press conference about the flooding in New Orleans: "I heard from a very reliable source who saw a 25 foot deep crater under the levee breach. It may have been blown up to destroy the black part of town and keep the white part dry". Alternatively, tens of thousands of litres of water per second flowing through a breech would cause scour directly in its path, just like you'd find at the bottom of a waterfall. That could easily dig a 25ft crater. But physics isn't contraversial enough for someone wanting to play the race card. No, better to indicate that someone was organised enough to get enough explosive to make a tiny crater on the wrong side of the levee, which went unnoticed by all the people on and around the levee, and detonated with just enough force to break the levee. What an idiot.
Post a Comment
Read more

Best quote of the year so far.

September 13, 2005
From a French group who go around letting the air out of SUV tyres : "We don't want SUVs to be seen as a sign of wealth, but something that is associated with an imbecile." Hear hear! It's funny how with the high price of petrol now, the GMs and Fords of the world are now putting gas-mileage as their number one selling point - on their truck and SUV adverts. They're actually proud that their trucks get 14mpg ! 14! That's not something to be proud of. That's something to be embarrased and ashamed of. I've never built an internal combustion engine, but I know if I did, it would be almost impossible for me to build a V8 that only returned 14mpg. You'd have to be a totally clueless engineer or in the pocket of the oil companies to make an engine with such appalling gas mileage. I suspect the latter.
Post a Comment
Read more

Crapola - Delta are filing for Chapter 11.

September 13, 2005
Shite ! Delta are filing for Chapter 11 today or tomorrow. I thought it would at least happen after we'd gone on vacation. Getting home wouldn't be a problem, but if they cut the route that we're flying, we're screwed. Delta are still using September 11th as an excuse for why they're in such deep shit. This would have happened anyway - all the big 3 over here will end up in Chapter 11 eventually because of the way the unions bleed them dry. United was sensible - they went first. Delta is going today and American have narrowly avoided it by getting concession from their employees.
Post a Comment
Read more 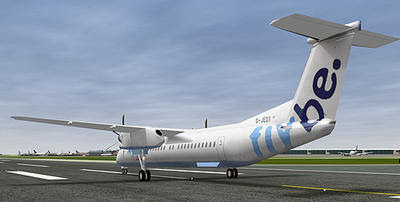 Another item ticked off before the vacation. A shiny new Bombardier Q400 in FlyBe.com colours :-) I'm counting the hours now. I think I've got my schedule down so that I'll be done with everything planned here in the office by tomorrow night. That leaves one day for people to panic when they realise I'm not going to be here for three weeks - ie. a day for special super-hot panic items that simply must be done. At this point in time, it all seems like a plan.
Post a Comment
Read more

The LDS and shopping.

September 11, 2005
Crossroads Mall in the center of town used to be open 10-6 on sundays. Then it went to 11-6, and now the Mormons own the land, it's noon-6. You know what? Why not just close the whole place down? Noon-6 is no good to anyone on a sunday. I don't mind the mormons, but when they start meddling in things which affect what I can and can't do in the precious little time I have off each week, then I get pissed off. It's a Nazi-like mentality dictating what people who don't go to church can and can't do on a sunday. If they're going to dick with that mall, they should just close it down completely. It's derelict anyway - the Gateway saw to that. And that's another thing. Who would build an outdoor mall (the Gateway) in a city where the temperature in summer is around 40°C every day, and in the winter its below zero and a metre deep in snow? There's literally two months of the year you can shop at the Gateway comfortably : October and March. Outside th
Post a Comment
Read more

September 11, 2005
Here's a shocker. Companies with ties to the B*sh White House and the former head of FEMA are clinching some of the administration's first disaster relief and reconstruction contracts in the aftermath of Hurricane Katrina. One is Shaw Group and the other is Halliburton subsidiary Kellogg Brown and Root. Both corporate clients of lobbyist Joe Allbaugh, B*sh's former campaign manager and another failed former head of FEMA. Its amazing that B*sh seems incapable of making the right decision for anything. The right decision in this case, obviously, would have been to get local companies and contractors to help with the cleanup and reconstruction, giving them badly-needed work. But no, being the Corporate President that he is, B*sh has opted again to give the work to huge corporations who are incapable of doing the work, but by a happy coincidence, are either owned or run by someone in the Whitehouse, or contribute a lot of money to the Republicans.
Post a Comment
Read more
More posts