June 23, 2006
The new Element is sitting outside the house now. Silver and blue. Looks quite smart apart from the overriding ugliness of the vehicle. I've driven it barely 20 miles so far and I'm starting to love it. The free XM radio is a bonus too.
Post a Comment
Read more

June 23, 2006
Proving once again that the biggest threat to America (apart from B*sh) comes from within: the terror arrests in the Miami this morning, where a group of people with absolutely no ties to any terrorist groups, least of all Al Qaeda, have been discovered to have been plotting to destroy the Sears tower in Chicago. That home-grown terror ring has caught the feds by surprise and shot yet another hole in B*sh's flawed 'flypaper' concept in Iraq.
Post a Comment
Read more

June 22, 2006
America has failed to get past the first round of the world cup. Again. This time Ghana had the pleasure of booting them out. I wonder if that means ESPN will stop showing the games and Budweiser will pull their sponsorship now ? So American Scott Speed is demonstrating that US race drivers absolutely cannot compete in a proper motor racing series (Formula One) - and the American football team have demonstrated that even an unseeded, unranked first-time-playing African nation can beat them. Me thinky they don't play well with others.
Post a Comment
Read more

June 20, 2006
A report claims the Pentagon has activated its missile-defense system and may shoot down North Korea's test missiles. What the hell? That system doesn't work in test - why do they think it is going to work for real? And does nobody else see the sheer panic factor of this action? It's not bad enough N.Korea are going to try to launch a ballistic missile, but America is going to send interceptors the other way. That's two ballistic missiles in the air. Russia, will no doubt enter the fray too. I hope there's no nervous silo operators or Generals on duty when N.Korea do their missile test or we'll all be waking up dead tomorrow.
Post a Comment
Read more

June 20, 2006
I got in this morning and there were three CNN breaking news emails in my inbox. They all arrived within 3 minutes of each other. Classic CNN / Pentagon bullshit: Email 1: The bodies of two missing U.S. soldiers have been found, according to a military spokesman in Iraq, Reuters reports. Email 2: Military spokesman in Iraq refuses to confirm or deny reports that remains of missing U.S. soldiers were found. Email 3: The aunt of missing soldier Kristian Menchaca confirms to CNN that the military has notified the family that his body has been found in Iraq
Post a Comment
Read more

Given it's not the most attractive vehicle ever, which would colour would you choose?
1 comment
Read more

June 19, 2006
In 1998 and 1999, there were 22 deaths of motorcyclists without helmets in Florida. In 2001, Jeb Bush repealled the mandatory helmet law for motorcyclists in Florida. (proving he's a total dickhead like his brother George W) In 2004, there were 250 deaths of motorcyclists without helmets in Florida. So the accident rate for deaths without helmets has gone up 1036% whilst the number of new registrations has gone up by 87%. Apparently wearing a helmet infringes on some American's faulty assumption that they have the right to do whatever they want. Frankly, if their brains aren't clever enough to protect the skull they reside in, then we should all be grateful for Darwinism removing these retards from the gene pool. We're better off without people like that. It's like this Roethlisberger guy last week - top notch American footballer who wears a helmet to play a game, but doesn't wear a helmet to ride a motorbike. I mean seriously - his brain must be malfuncti
Post a Comment
Read more

Budweiser have no sense of humour. 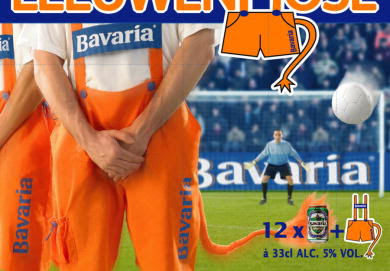 FIFA have confirmed that they ordered hundreds of Dutch fans to take off their trousers before entering the stadium for their country's World Cup match against Ivory Coast on Friday. The fans were all wearing Holland-orange dungarees bearing the Bavaria Bier logo - not one of the World Cup official sponsors. Budweiser complained. FIFA acted. The fans were all forced to de-pants, and were half-naked at the match. This proves three things. 1. Apart from their beer being distilled cow piss, Budweiser have no sense of humour. 2. Thousands of naked fans at a football match are far better advertising and publicity than Bavaria could have ever hoped for. 3. No matter how much money, advertising and sponsorship Budweiser throw at the World Cup, America still isn't going to win. Fueled by their pantsless fans, Holland won the game :-)
Post a Comment
Read more

A new addition to the family? 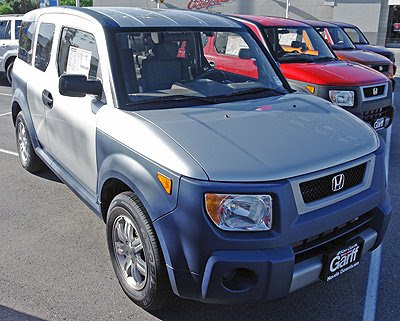 Before you get all excited, I'm talking about a car. Because I'm a bloke. I believe I'm going into battle with a car dealership this week over a Honda Element. Eminently practical, fun to drive and butt-ugly. But I like them. Could this be in our driveway next weekend?
2 comments
Read more
More posts