November 18, 2005
With the launch of the Xbox360 just around the corner, I thought it was time to have a bit of a data dump of some facts and figures that the mainstream press are neatly circumventing.

Fact: We all know there's two versions of the package. The $300 crippleware version, and the $400 "actual" version. (the $300 version has no hard drive and so is basically totally useless).

Fact: Microsoft finally got to the bottom of the backward-compatibility issue, in about the most Microsoft-esque method you can imagine. Of the 800-odd Xbox titles, only 213 of them will work on the Xbox 360. BUT, a software emulator is required for each original Xbox game, which means you need the hard drive for these games to work, which means you need the $400 version of the package. So lets say you have 10 XBox games. That means you need to download and install 10 emulators, one for each game, before they'll run. And that fact that they run through an emulator means they'll be slower and buggier than just running them on an Xbox.

Fact: The launch title - Perfect Dark Zero - has the hallmarks of being a bit of a disaster. Microsoft bought out Rare some years ago to try to get the talent to write games for them instead of Nintendo. Most of the programmers said "no" and left, so whilst Microsoft technically own the Rare name, they don't have any of the talent. Which means Perfect Dark Zero has been written by a bunch of people who had nothing to do with the original title. Worse still, Microsoft are so desperate to get the game out that they started manufacturing the discs before the game code was even finalised. This means there will be v1.0 and v2.0 versions of the game. Or in short - if you buy it on launch day, there's a good chance it will be full of bugs. Who the hell does versioned games on a console?

Fact: The Xbox360 costs, conservatively, $375 to manufacture. Selling it for $300 means they're already taking a $75 loss on every machine sold. When retail prices fall, as they always do, Microsoft is going to make more and more of a loss on this machine. Even the $400 version can't help them out. The hard drive alone costs $30 to manufacture, then you add in the headset and the other accessories and realise the $400 version costs about $500 to manufacture.

Fact: Microsoft has admitted there will likely be shortages towards Christmas as the initial run sells out. Whether you believe there's a manufacturing problem or not, it looks like a bad sales tactic. Microsoft will likely have plenty of units to sell, but in order to try to create demand for them, the pre-Christmas sales drive will likely focus on shortages of the product, enticing people to "buy one now while you can". They need to sell as many as possible before the PS3 comes out and kills their product dead in the water.

Fact: Whilst the Xbox360 my be HD-compatible, it won't play DVD-HD or BluRay. So you can't use it for next-gen DVDs. Sony on the other hand are going to take a loss on the PS3 for one reason : it plays BluRay discs. By saturating the market with a BluRay player as part of their console, Sony will force the HD format issue and Microsoft will again be left with egg on their faces.

Fact: The Xbox360 itself looks nice and svelte in its white package but it's actually larger than the original Xbox. This is amazing considering Microsoft have taken the power supply out of the box and made it an external brick. And what a brick! Nearly the size of a complete PS2-Slim, the Xbox360 power supply is a monster. 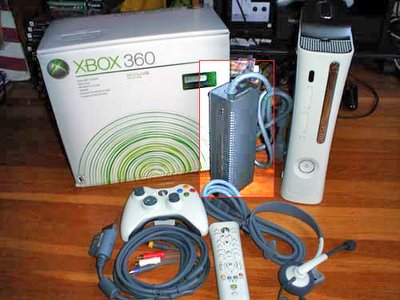 Fact: No serious gamer would ever buy an Xbox360.

Despite all of this, despite the upcoming Playstation 3 which is smaller, cheaper, will run all PS1 and PS2 games (without an emulator), and has far, far better graphics and processing speed, I suspect there'll be a lot of Xbox360s walking off the shelf next week. And then when the PS3 comes out, there'll be a similarly large number of XBox360s going for $50 on eBay.