No more Rose Tyler. Was that wise? 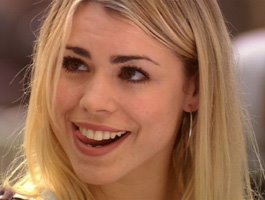 We watched the season finale of Doctor Who last night and they finally wrote Rose Tyler out of the show. They changed Doctors on us after the first series and now they've gotten rid of the other key character. I'm not sure that's a clever thing for the old Beeb to have done. I could be wrong. They were happily salvaging Doctor Who from the old days of nauseatingly long story lines and changing characters, and now it looks like they've fallen off the wagon. I don't know why they've done it either. The new series has been winning award after award and rave reviews. Changing both lead characters seems like the sort of moronic thing a US network would do.
We'll have to see how it pans out later in the year but I'm not holding high hopes for the next season :-(
Still - she's trapped on a parellel earth, so if the new assistant sucks donkey balls, I guess they can write her back in. There's a faint glimmer of hope.

Anonymous said…
AIUI Billie Piper decided she didn't want to stay on for another series of Dr. Who. According to a report I heard on the radio (BBC) they offered her lots more money and a contract allowing her to take on other work, but she still refused.
15:50

Next up : the oxygen surcharge.

The airlines are doing everything in their power to make their form of transport as miserable and torturous an experience as possible, and they're doing it very well. Backscatter X-ray machines, bomb sniffers, the dim-witted TSA morons and the 'no belt or shoes' security lines have conspired to make the airport experience bad enough as it is.

Next up, then, th…
Read more

Seems that the spineless John Mason still wants to marry his runaway bride Jennifer Wilbanks. Frankly, he should wait, because that woman needs to do a short spell in jail to make her learn not to waste everyone's time. OK people get nervous before their weddings. But there's a really big freakin' difference between simply not turning up, and phoning in to say you've been kidnapped. This woman clearly needs some time in a mental institution too.
She's cried wolf now and this is bad on two fronts. First - if she ever does actually get kidnapped, nobody will believe her. Second, those people who have legitimately been kidnapped, will now be doubted until it could be too late.
Not to mention that in this post Mark Hacking world, where gormless twats hack up their wives and claim they've been kidnapped, this UFO-eyed woman managed to get the police and feds looking directly at her hubby as a potential murderer.
And after all that, would you believe he forgives her ???…
Read more