July 26, 2005
I just watched Discovery's return to flight launch on NASA TV and it was nail-biting. Watched it from the 9 minute count, through retraction of the crew access arm and the LOX vent. They had cameras everywhere so they showed the main engine gimbal check and the control surface checks. It launched exactly on time and they kept showing the camera view from the external tank looking back at the orbiter right up to the point of tank separation, which for a space buff like me, was awesome to see. The orbiter separated cleanly and did a positive-X burn to move away from the tank. Cool. 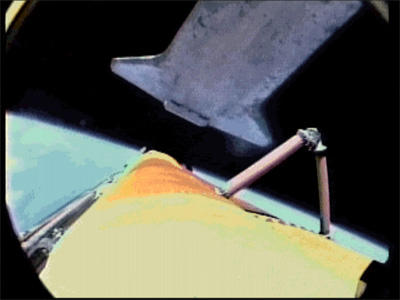 Just before the main engine shutdown, you could see the halo effect around the orbiter and as the engines cut out you could see ice and other debris overtake the orbiter from behind as the thrust was cut and acceleration slowed. There was also some debris came off the tank during launch, and a bloody great chunk of mounting strap just after the SRB separation but it didn't look like any of it did any damage.