It's called "Reap what you sow".

October 21, 2005
Ford are busy learning an important lesson : reap what you sow.
You see the production of their new mid-range Fusion family sedan has had to be halted because one of their suppliers is having difficulty supplying parts. Collins & Aikman Corp. provides instrument panels, door panels and trunk systems for the Fusion. The problem is that they are in Chapter 11 bankruptcy protection. How did they get there? Because Ford lowballed them on parts supply costs.
Otherwise known as Karma, or Yin and Yang.
Trying to find an image on the Ford Fusion website is a chore. It's suffering one of the worst attacks of Mystery Meat navigation in the history of the internet. But I slogged on to see what all the fuss was about.
Looks promising....

Holy shiat! I think I just threw up a little bit in my mouth. After the fantastic-looking 2005 Mustang, Ford apparently fired that designer and had the Fusion scribbled out by one of their talentless, blind monkeys. Would you just look at those chunky wrap-over headlights! The nose of a car is one of its defining points. The nose of this car just screams "ugly". It's amazing how one design problem can destroy the entire look of a car. Think back to the bug-eyes round headlights on the Subaru Impreza a couple of years back. Awesome car, but the look of it was destroyed by some godawful headlights. 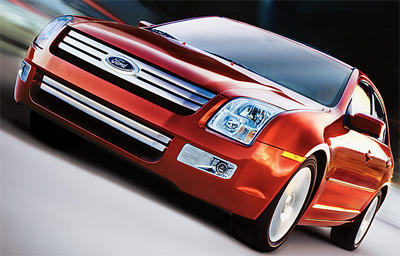