Blame only one person : Your so-called President.

September 02, 2005
I've come to the conclusion that not only is B*sh a liar, but he's a pathological liar. He's incapable of telling the truth. Everything he says is a lie, yet I believe he thinks he's telling the truth.
For example - he's just been on TV telling us that the New Orleans convention centre is secure, but CNN then cut to their reporter on the spot who said there was no sign of any change or security inside or outside the centre.
It's "mission accomplished" all over again.
B*sh went to war on a lie, and sent huge numbers of his country's troops overseas, so many that there's not enough left to deal with any crisis at home. B*sh has cut $30M a year from the Army Corp of Engineers budget. B*sh has got so many local governments tied up with finding his fucking war that New Orleans hat to cut or cancel their funding for levy maintenance last year. B*sh has sorted it out so that people in Iraq get regular airdrops of food and water, yet its taken him 5 days to do the same in his own country. B*sh would not allow the use of military facilities and air bases to house the refugees. He wouldn't even go to the disaster site until 5 days after the event. It makes my stomach turn to see him hugging families and crying during his visit today. It was acting not even worthy of daytime television. The man is pure evil. He is a liar and a hyppocrite. 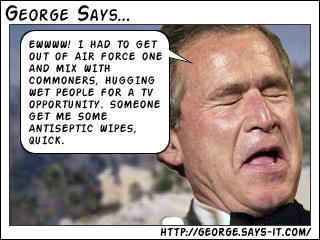 B*sh has to go, and he has to go now. This would not have been anything like the catastrophe that it is if the federal government had got involved on the first day. It was a wholly predictable event, and one which FEMA even had a goddamn practice session for last year. There was a weeks warning of the hurricane, New Orleans is below sea level - it seems obvious to everyone except the government that this was a disaster that was text-book perfect, and thus ought to have been text-book preventable. The responsibility for this whole situation lies squarely at the feet of the commander in charge, the so-called President. He fumbled the ball, badly, and he must be personally held accountable for the the deaths of all those who have died in the sewage-filled streets of New Orleans. There can be no better reason to impeach him. His inaction has left him with blood on his hands, the blood of his own citizens.