September 01, 2005
I always thought that Stephen King's description of the chaos that ensues in The Stand was more dramatized than it would be in real life - but New Orleans has proved me wrong.

I always thought that the US government, especially in the post-9/11 world, would be ready to deal with epic disasters in an expedient and appropriate manner - after all that's what Homeland Security and the Patriot Act was all about - but New Orleans has proved me wrong.

I always thought that, at the least, the B*sh administration would be capable of handling another crisis like 9/11 - but New Orleans has proved me wrong.

The federal government is responsible for stepping up to bat immediately in situations like this. B*sh declared disaster areas before the storm hit, which was a good start, but then went back on vacationing for two whole days. He sat and watched from his Texas ranch as the Mississippi and Alabama gulf coasts were levelled, as Slidell was blown off the map, as New Orleans filled with 20ft of flood water. This is exactly the same reaction he had during 9/11 - the man is simply incapable of operating in an emergency.

This begs the bigger question : what exactly happened to all the money that was redirected into B*sh's much-touted Homeland Security? Wasn't a large percentage of that money supposed to go to shoring up America's ability to respond and provide relief in the wake of a disaster like this? The reality of the situation is that most of the aid currently pouring in is coming from private companies, state governments, and municipal governments. Homeland Security are conspicuous by their absence. Doesn't it look like all that money, all the Big Brother features of the Patriot Act, and all the scaremongering to justify Homeland Security was a giant lie?

And what about the National Guard? Their numbers have been so dwindled by B*sh's war in Iraq that there aren't enough left to deal with a crisis at home. Again - abject failure and a total lack of planning. B*sh has to be held accountable for why America can react more easily to Iraq's needs than those of New Orleans.

And where is the "President's" leadership? Just as in 9/11, he has no plan, has no clue, has no concept. Just as with Rudy Guiliani in New York, this time Mayor Nagin, Senator Landrieu and Governor Blanco are the only people with power and influence that have an actual grasp on the ground situation in New Orleans. B*sh and the Federal government have again failed.

Ask yourself this : if the money that's been poured into Homeland Security has resulted in such an abject failure and lack of response after a hurricane, what, precisely, is going to happen to America if a terrorist cell manages to detonate a nuke or a dirty bomb somewhere? If more planes were hijacked? If a ship loaded with 10,000 tons of explosive was floated up the Hudson and detonated?

It's not like the hurricane just appeared out of nowhere. They had at least a weeks warning. It's not like flooding wasn't inevitable - New Orleans is built below sea level. There could, and should have been pre-emptive planning. Levys should have been reinforced with sandbags before the event. Triages and rescue centres should have been set up before the event. Yet we see New Orleans descending into Gotham-like savagery today. FEMA are pulling out rescue equipment because it's no longer safe. Looting is rife, rescuers are being attacked and shot at. Mob mentality is taking rule.

The out-of-control war in Iraq, the out-of-control gas prices at home, the out-of-control looting and rioting in New Orleans, the abject failure of the government to act sooner or put measures in place beforehand for hurricane refugees. Do the American people need any more proof that B*sh needs to be removed from office right now? The man is simply incapable of running a country. He has only his own interests and those of big business at heart. I hate B*sh. The man is a liability. But you don't need to hate him to see today how ineffective and small he really is. He's a low-IQ idiot cattle rancher from Texas who has stumbled into the highest office in the country through vote rigging and scaremongering. Enough, America. Get rid of him and replace him with someone - anyone - republican or democrat - who can actually run the country and present a better image to the rest of the world.

Your federal government is currently out of the office. Please leave a message and we'll get back to you as soon as we can. Meanwhile, enjoy this : 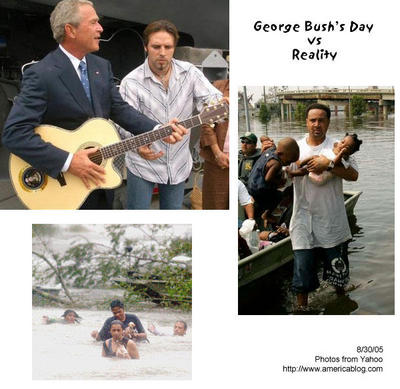