September 02, 2005
It looks like a chemical plant has gone up this morning, and there are a couple of big fires burning in downtown New Orleans on Poydras street. There's an enormous oil slick forming in the Gulf, south of N.O, coming from two 2-million barrel oil tanks which are leaking at one of the refineries.
B*sh helpfully admitted that the initial federal response was "unacceptable" (that's Big of him), and the Ray Nagin - the mayor of N.O - has given up with political correctness and told the feds to "get off their asses and get the fuck down here".
Three cheers for Ray Nagin. Now there's your politician who's in touch with what's going on. He stayed on the ground throughout the whole thing so far, and this pic from CNN shows he's not exactly thrilled to be speaking to B*sh. Frankly I'm surprised B*sh even had the stones to land - the pussy normally flies around stuff like this observing from the air. 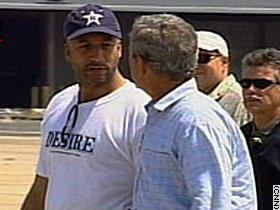 Meantime, the official reported version of events is seeming more and more sanitised compared to what has actually been going on. The Outpost Crystal blogger has interviewed some people at the convention centre today who've told him that the troops are throwing supplies off the overpass so that they are destroyed when they hit the ground. When people walk around to try to get up to where the troops are, they're pushed back at gunpoint. The busses we've been told about on the news channels have never shown up at the convention centre. The people there have been cleaning windows, cleaning the streets, and organising themselves into single-file queues, elderly at the front, then women and children - anything to try to get the buses which keep passing them by (empty) to stop.
Meanwhile the scum of the earth are still looting, and now there's random murder and rape as well as arson. Ok the national guard and troops need to be cautious, but let the needy get the supplies and help, and shoot the looters and criminals.

Meanwhile some preacher has been quoted on CNN as saying "God cannot be pleased." Umm. Well if you believe in God, then surely you must understand that this hurricane is an Act Of God, and the suffering, pain and death is all created by Him as a result.......I'd say if this was his goal, then He's dancing around naked laughing His arse off at the moment!

Alternatively of course, this could be a (say it with me) "natural disaster".